Worcestershire Women’s Rapids will complete their ECB County T20 programme when they take on leaders Somerset in a doubleheader at Halesowen CC this Sunday (May 16).

The Rapids won their two West Midlands Group games against Berkshire and had a double wash-out versus Staffordshire before losing both matches at the hands of Warwickshire.

Somerset will provide another stiff test and have registered five wins from their opening six games and a total of 20 points.

But the Rapids will be able to welcome back key seamer Emily Arlott, who was unavailable last weekend, as part of a 12 strong squad.

Rapids captain Chloe Hill said: “There were some promising performances at the weekend, and the number of ‘extras’ was the only difference in the first game.

“It was a great learning curve, especially with the two youngsters, Ellie Anderson and Hannah Hardwick, opening up with the ball.

“They bowled well in the first game, and they will take a lot from the whole experience.

“We’ve got Emily back this weekend, and it will be nice to have another experienced seamer to call upon.

“Somerset have got quite a few of the Western Storm players in their squad, so it will be good to see how some of the girls who aren’t in the regional team step up against them. It will be quite exciting to see.”

The Rapids are lying in third spot with 10 points from their six games.

The matches, which get underway at 11am and 3pm, were initially scheduled to be played at Bromsgrove before the switch to Halesowen. 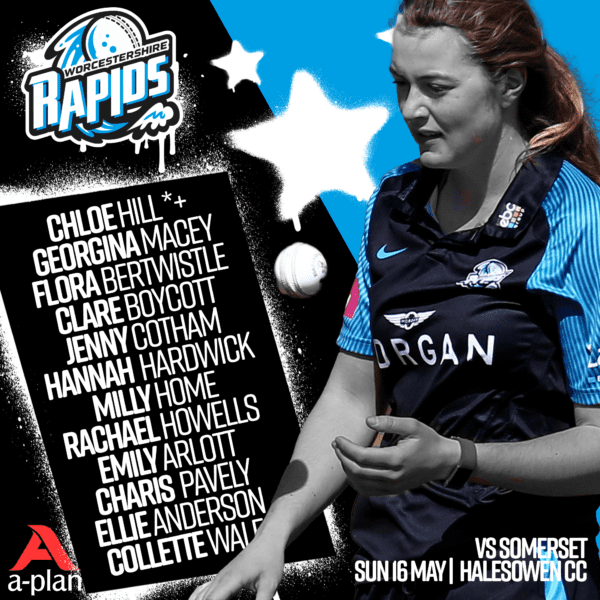