Alan Richardson is looking for the same level of performance from Worcestershire Rapids, as shown during most of the first half of the Royal London Cup group programme when they take on Hampshire on Wednesday at the Ageas Bowl.

They have also bowled effectively in the powerplays and at the ‘death’ apart from the very finale of the home game with Middlesex.

The Rapids are lying in second spot heading into the second half of the campaign. 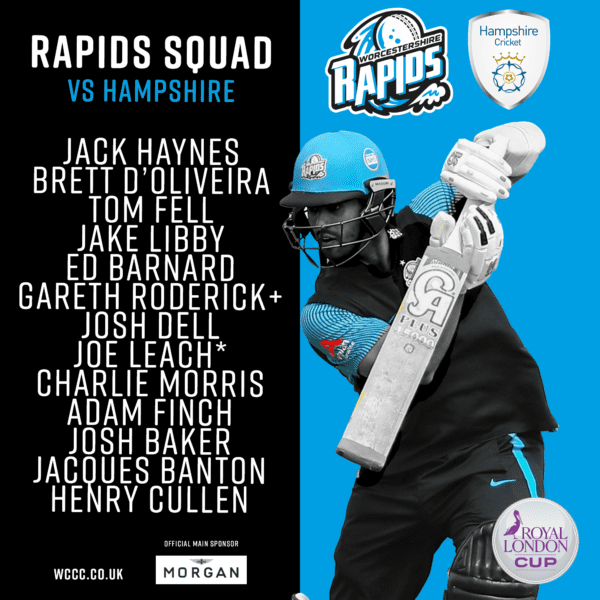 Assistant-Coach Richardson, who is overseeing the Cup in tandem with Kadeer Ali, said: “I think we’ve acquitted ourselves well in those first four games and put in some excellent performances, which have given us the chance to win three of them.

“The boys are encouraged to continue that, really.

“I think they have shown a tremendous amount of enthusiasm towards it and have applied themselves brilliantly.

“I thought the game on Sunday (versus Middlesex) was very similar to the previous Sunday (against Kent), but all the other ones have been different kind of games.”

In terms of the batting, Richardson said: “Certainly in terms of building ourselves a base, to help win those games, when we were chasing down targets, they have done well.

“They should be pleased with that and be looking to push on with that. They have applied themselves well, have practiced exceptionally well, and have had the mindset of trying to build those big totals for us.

“There have been runs all down the order, and that has to be the case because, the risks we are asking the guys to take to score the runs we need at the strike rate we need, it’s tough for someone to say I’m going to keep doing that.

“You are not going to be able to score the runs yourself every game because we are pushing and stretching ourselves to score quicker all the time or at a rate to help us win games of cricket.

“The boys have taken it on board, and we need to continue that, and even Josh Baker at nine has made some valuable contributions.

“We need to continue with that and trust ourselves all the way down that we can make those valuable contributions.”

The Rapids have done well with the ball via an attack in Josh Baker, Adam Finch and even Club Captain Joe Leach, which has not played much List A cricket.

Richardson said: “The guys set themselves a challenge to bowl their best ball for as long as possible and be learning throughout.

“Joe, Adam and Josh haven’t played a lot of white-ball cricket, but we set ourselves that challenge and, in the main, we’ve done it well for long periods.

“Against Middlesex, we didn’t quite get it right at the very end, but for the majority of those 41 overs, we made them work very hard.

“It took a special innings from Steve Eskinazi and some very good hitting at the end to get them to the total they did.

“We need to continue pushing and stretching ourselves to do better and better and more consistently. It doesn’t surprise me we’ve had some really good rewards with the ball just as we have with the bat.”

The Rapids will select from a 13 strong squad, with pace bowler Ben Parker released to play for the Under-18 side against Warwickshire in a three-day game at Portland Road, Edgbaston.