JOSEPH RETURN TO COUNTY SQUAD FOR TRIP TO TRENT BRIDGE

Joseph was rested for the most recent Championship fixture against Durham CCC at the Emirates Riverside after playing in the previous four matches.

The 24-year-old has so far picked up ten wickets for Worcestershire and made significant contributions with the bat of 46 against Derbyshire and 61 in the first meeting of the summer with Nottinghamshire at New Road.

Joseph is part of a 12 strong squad as Worcestershire look to sustain their challenge to finish in the top two in Group 1.

They are currently only six points behind leaders and reigning champions Essex.

Gidman said: “It is an extremely tough group, and we know the other teams when they are at full strength, are tough teams to beat.

“However, we’ve got a great culture, a great belief in our group that we can take anyone on, and the lads will try their absolute utmost to do that again this week.

“it’s a very tight group and, with the weather and some of the wickets we’ve played on, we haven’t had many games I feel we could have genuinely won.

“I’m really pleased with the points we’ve got and, for this group of players to be in the mix as we are against the teams we are playing, shows what a great job they’ve done so far.

“We will take this game as it comes, try and get as many points as we can, and then move onto the next one.”

Worcestershire will be playing for the seventh successive week, whereas Nottinghamshire have had ten days with no action.

Gidman said: “It is demanding the way the cards have been dealt for us so far this season, but one of the strengths of the group is the fact we get on with what is right in front of us.

“There has been no whingeing or complaining about it. We are just taking one game at a time, and the lads are putting in so much effort. The attitude has been fantastic, and we are looking forward to another tough game of cricket against, once again, a very strong team.”

Worcestershire have used a rotation policy with their pace bowlers, with Joe Leach, Charlie Morris, Dillon Pennington and Joseph all having a break from the action.

Gidman said: “From a selection point of view, it hasn’t always been ideal, but the reality is that we want to try and make sure we look after these lads, not just now but in the future as well.

“It may not look much from the outside, but one week’s rest means they may stay fit for the next three months as opposed to pushing things and risking an injury that might keep a player out for three months.

“We are trying to get the balance right of reducing the risk of getting injured but also trying to increase the potency when they are playing as part of a three or four-man attack.

Jake Libby will be returning to play at Trent Bridge for the first time since his move to New Road on a three-year contract.

He passed 1,000 runs for Worcestershire in only his 11th match for the club at Durham and has faced more deliveries – 1292 – than any other batsman in the country this season.

His opening partner, Daryl Mitchell, has happy memories of the ground.

He rates his century there in 2017 as amongst the finest of his 37 for Worcestershire who pipped their opponents to lift the Division Two title and gain promotion. 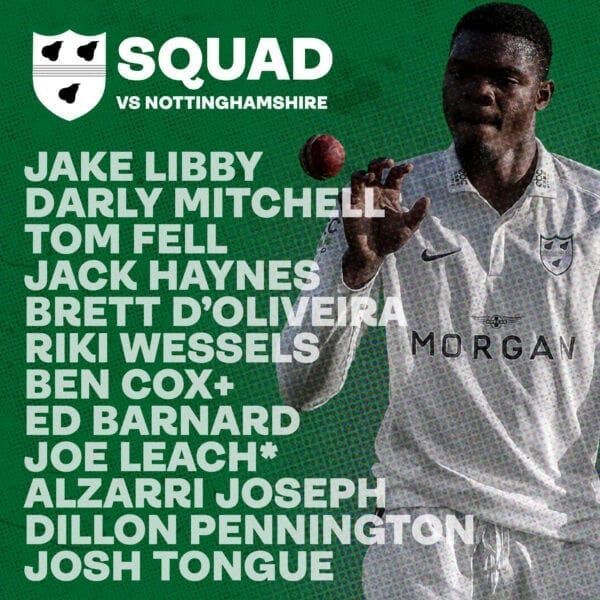