HRH THE DUKE OF EDINBURGH AND WORCESTERSHIRE COUNTY CRICKET CLUB

The death, on Friday, of the Duke of Edinburgh, will have prompted memories among many Worcestershire CCC’s players and Members of happier times.

Former County Secretary Mike Vockins recalled that after Worcestershire won the County Championship in 1974, Norman Gifford and the team were invited to Buckingham Palace to receive the trophy from the Duke of Edinburgh.

The trophy had been donated by the cricket charity The Lord’s Taverners, and Prince Philip, in his position as permanent Twelfth Man of the charity, agreed to present the trophy. 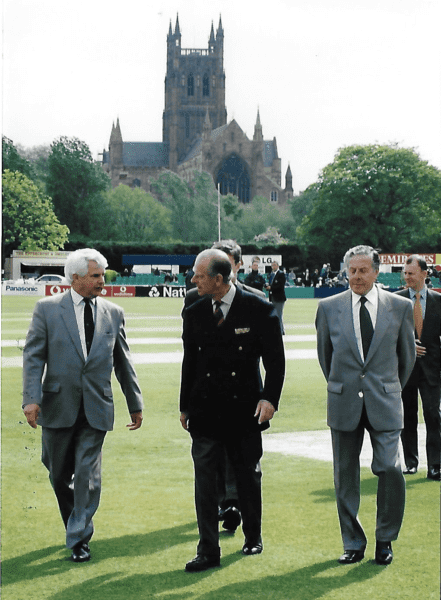 Mike Vockins recalled that this trophy’s first presentation had been made at the end of the previous season to that summer’s Championship winners, Hampshire.

“Following our Championship win in 1974, there was no mention of going to Buckingham Palace”, Vockins remembered, “and so I pressed the Test and County Cricket Board to arrange such a visit for our players.

“At first reluctant to approach the Palace, the Board eventually did so and, after much toing-and-froing, we were invited, the team and the Club’s officials along with representatives of TCCB and the Lord’s Taverners, to the Palace.

“Since then, it has become a feature of every season that the County Championship winners are invited to the Palace to receive the trophy from the Duke himself.”

Worcestershire’s County Championship title successes in 1988 and 1989 saw captain Phil Neale and his team, accompanied by the Club officers, back at the Palace again to receive the trophy from the Duke of Edinburgh.

“There was an amusing story relating to that 1988 presentation,” Vockins explained.

“Minutes before we were due to meet His Royal Highness, it was discovered that the trophy had not been reclaimed from Nottinghamshire, the previous summer’s champions. 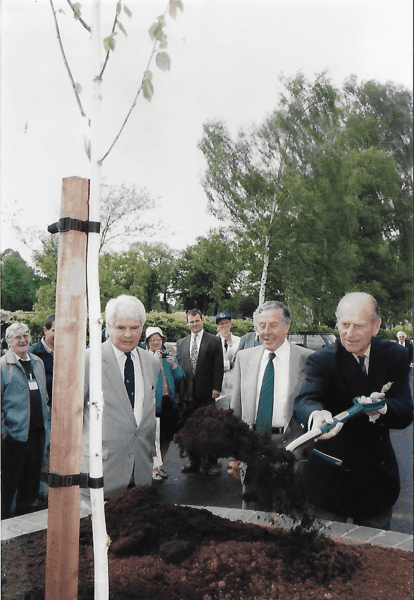 “One of the Lord’s Taverners’ officials gamely offered to whizz round to their own offices, just around the corner from the Palace, and produce a substitute which was why the Duke presented to Phil Neale the Brands Hatch Motor Racing Trophy – which brought a wry smile to the Duke’s face and an amusing comment or two from him.

More recently, in 1999, when the Club celebrated its centenary in the County Championship and its hundredth year at the New Road ground, the Duke was guest of honour for the Club’s one-day game against the Australians, part of the visitors warm-up programme before the Cricket World Cup that summer.

Vockins recalled, “Prince Phillip took a keen interest in the pitch before the start of the game and was introduced to the players of both teams. He stayed to watch much of the cricket and was a delightful guest.

“Somewhere around tea-time, with the game moving to an exciting climax, the Duke said he would love to stay and see the finish.

“We readily agreed, of course, but his equerry leant across and tactfully said ‘Sir, you won’t forget you are meant to be giving a lecture in the City this evening’, which brought a pithy response from the Duke who delayed his departure as late as possible, before boarding his helicopter and off to London.

“It had been a memorable and greatly valued visit helping the Club to mark its centenary royally. “