Worcestershire’s great and glorious history is being celebrated in Timelines at opposite ends of New Road.

Many of the key players, personnel, and ground developments are highlighted, spanning more than 150 years.

The project has been ongoing throughout the winter and completed in time for Members and Supporters to view during the opening home LV=Insurance County Championship match with Sussex, starting April 21.

It has been funded by the Worcestershire Supporters’ Association in the latest of the many projects at New Road the Association has helped to finance during its 71-year history.

Some of the many superb players who have performed for Worcestershire are captured on the updated Players’ Timeline at the back of the Basil D’Oliveira Stand. 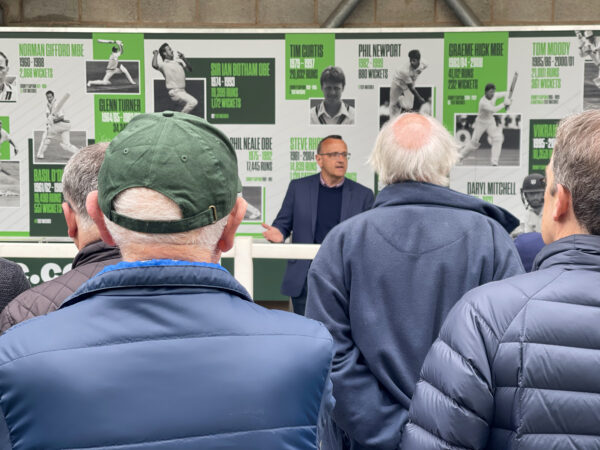 It concludes with long-serving opener Daryl Mitchell who retired at the end of the 2021 season.

The Club Timeline at the New Road End shows how the ground has developed from humble origins into the impressive stadium in 2022.

It includes photographs of all the pavilions, the old scoreboard, how terracing and buildings on the ground have developed, pictures taken from the Worcester Cathedral tower looking over New Road, key personnel and ground staff and even some of the great floods.

Worcestershire Company Secretary, Sarah Gluyas, speaking at the ceremonial unveiling of the two Timelines, said: “Our club has such a long and proud history, 157 years, lots of momentous events and honours that we want to be able to record and celebrate with everyone.

“One Timeline is celebrating players and celebrating the history of the ground and how the site has developed from those very early days.

“It is something all the members, supporters and visitors to the club will really enjoy

“We also have a third area by the turnstiles we are working on, which will be with us in the near future.”

Worcestershire Heritage Co-Ordinator, Tim Jones, said: “When he finished his last round in the Masters, Tiger Woods said, ‘this tournament and venue mean so much to me.’

“That is the precise reason we are here today because our club and these players mean so much to us.

“Cricket is that sort of game; we engage with it, entertains us, sustains us through the winter, but equally, it provides those moments of joy and frustration.

“Those moments create those long-lasting memories we continually talk about year after year, and it is only fitting that these cricketers are remembered.

“There are some new additions on the Players’ Timeline like Fred Pearson, ‘Doc’ Gibbons and Roy Booth and, as we move into the more recent era, Tom Moody, Vikram Solanki and Daryl Mitchell.

“The Club Timeline at the New Road end has about 50 pictures representing Worcestershire’s history and ground developments from the early days to the current day and how the ground looks now.”

Andrew Jenkins, Chair of the Worcestershire Supporters’ Association, said: “It is great to embrace the history and success of the club in this way.

“It provides a vast amount of knowledge for members and supporters, old and young, to reflect on and highlight some special players and memories of this great club.

“The Supporters’ Association are delighted to help fund this worthwhile project which is a great addition to New Road.”

Jason Adams, Business Development Manager for DRPG, who designed the modern-looking Timelines, said: “It was quite a daunting project for us because Worcestershire is such a pillar of the community, and we wanted to do a really good job

“It took a little bit longer than it should because we all started to get a little bit of cricket badgery about it and started researching a lot of the players!

“But the outcome is magnificent, and I’m so pleased and thrilled with it. It is bright and vibrant, but it also looks respectful to the people on there.

“As a business, we are quite a large company who deals with lots of huge organisations, but in the 42 years we’ve been around, Worcestershire has been our home, and working with companies within the county is hugely important to us.

“I know that with Dale (Parmenter), who owns the company, one of his key things is we support the local economy and local business and to do something for the guys here at Worcestershire is just a thrill for us.”