Worcestershire CCC will launch their 2021 County Championship Group One programme against reigning champions Essex – and will be looking to repeat last summer’s excellent form in red-ball cricket.

In 2020 Worcestershire came within a whisker of reaching a Lord’s final in the Bob Willis Trophy after some superb performances with both bat and ball.

Now they will be striving to carry on in the same vein when they face Essex – the 2019 County Champions and 2020 Bob Willis Trophy holders – at the Cloudfm County Ground, Chelmsford starting on Thursday, April 8.

Club Captain Joe Leach and his team-mates will be in action at New Road for the first time against Nottinghamshire from Thursday, April 22.

Worcestershire Cricket Steering Group Chairman, Paul Pridgeon, said: “We played some very good red-ball cricket in 2020, which was a huge improvement on the year before. We want to keep improving.

“The batting came on leaps and bounds, putting big totals on the board with all the top order batters doing well.

“There were some very encouraging signs and, with the addition of Gareth Roderick in the top-order, that is going to help, and we are quite optimistic.

“It is always a challenge when you go to a new club and whatever their track record, you’ve got to establish yourself. Gareth will be itching to do that.

“The players will relish the challenge of playing Essex in the first game. You can’t dispute how well they’ve done, but we will want to show what we are capable of.”

The eagerly awaited home derby against Warwickshire will take place in the tenth and final group game beginning on July 11.

The competition will see teams split into three groups of six, playing each other home and away, with the first nine rounds matches beginning on a Thursday and final round on a Sunday.

The top two in each group will qualify for Division One with the winners of that division will be crowned County Champions.

The other counties will move into either Division Two or Three, based on their positions in the respective groups, and play a further four matches.

The top two in Division One will also contest a five-day final at Lord’s for the Bob Willis Trophy.

The fixtures for Division One, Two, and Three will be announced at a later date along with those for the Royal London Cup and the Vitality Blast. 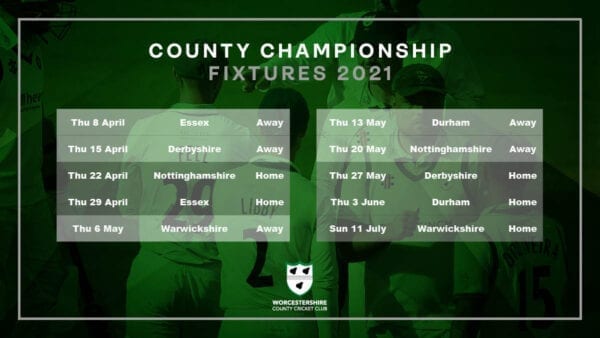 You can add fixtures to your e-Calendar by clicking here

As always, the best way to watch all of the action at New Road is with one of our Membership Packages. Memberships can be purchased online by clicking here or over the phone by calling the Membership Department on 01905 337921.

🗣 @JakeLibby1 joins us after his marathon effort against Essex in the drawn @CountyChamp fixture against Essex Ful… https://t.co/RGd6IwuXCb

RT @WorcsCCCWomen: 🌊 RAPIDS BACK TRAINING 🌊 How good to be back! Good to see over 20 women’s rapids back in training today ahead of the T…

Like the look of our 2021 @morganmotor x @Nike match & training wear? You can get your hands on your very own from… https://t.co/u6Zik5C7t3

Cricket will pause on Saturday 17 April, as the game remembers HRH Prince Phillip, The Duke of Edinburgh. Full S… https://t.co/35F2UbqC4K

📝 MATCH REPORT Jake Libby carried his bat for a magnificent 180 in an innings of immense quality and concentration… https://t.co/YbKDo2cNZB

MATCH DRAWN The skippers bump fists and call time on our opening @CountyChamp fixture of 2021. A superb performan… https://t.co/S33Es4umZv

WICKET! Cook b Leach 12 Crackerjack delivery from the skipper cleans up Cook. Essex 17/1 after 6.1 overs… https://t.co/jODxtLLLiT

😅 @JakeLibby1 has carried his bat throughout the entire Worcestershire innings, and has been on the field for every… https://t.co/a4uKZFjzTR

WICKET! Pennington st Wheater b Harmer 56 Pennington tries to go big but perishes to off-spinner Harmer after an e… https://t.co/ncgesWK559

5️⃣0️⃣or Pennington! @DillonPenningt4 brings up his maiden first-class half century with a pull through fine leg!… https://t.co/5gUuJllKHa

Libby & Pennington continue to frustrate the Essex attack, cutting the lead down to 64. Worcestershire 426/8 #WeAreWorcestershire 🍐

4️⃣0️⃣0️⃣ up for Worcestershire Libby guides one down to third-man for a single to bring up the 400. What a brilli… https://t.co/6NqrFzwzWX

WICKET! Leach c Wheater b Allison 1 Leach is unlucky to be strangled down the leg-side off Allison. Worcestershir… https://t.co/vdMaxweTw4