Worcestershire Women’s Rapids launch their ECB T20 programme on Sunday with a doubleheader against Berkshire Women at Falkland CC, Newbury.

Chloe Hill will lead the Rapids for the first time since becoming the official captain for the 2021 campaign.

A 12 strong squad has been selected, including Hill, Clare Boycott and Emily Arlott, who later in the summer will be in action for Central Sparks in the Rachael Heyhoe Flint Trophy.

Also named are Ellie Anderson, Hannah Hardwick and Charis Paverly, who are part of the inaugural Central Sparks Academy.

Worcestershire CCC Academy Coach, Elliot Wilson, says the early season T20 games are an ideal opportunity for players to showcase their skills and push their claims for a Central Sparks call-up.

He said: “The women’s senior cricket has found a niche and a place in the calendar now. Two years ago, everyone was nervous that women’s senior county cricket might fizzle out.

“It is an exciting four weekends of cricket coming up, eight games of cricket, and we are looking forward to seeing how the girls go moving forward”.

“It is a great shop window for everyone, to get some good cricket under their belts early season for those who have got the Rachael Heyhoe Flint Trophy and The Hundred to look forward to and a good opportunity for those not involved in those competitions, to say ‘here I am, if you need someone, I’m playing good cricket, and I’m desperate to play.

“Looking at the side we’ve got on Sunday, it looks a competitive team, well balanced, lots of cricketers with lots of performances behind them and exciting young players who are currently on the Central Sparks Academy.”

On Chloe Hill’s appointment as Women’s Rapids captain, Wilson said: “Chloe has been with Worcestershire for several years and a member of the Central Sparks squad.

“She is one of the senior players in the side, and she has played a lot of men’s senior cricket.

“She is as tactically aware as any of the group is well-liked, and is one of those people who is driving women’s cricket in Worcestershire forward and is always challenging me to try and raise the profile and do more for this women’s senior side.

“She is the right player for the job at present. As wicket-keeper, she is in a good position tactically to see the angles, to move players around, and she becomes very much a focal point of everything we do.”

The Rapids will play two games against Berkshire, starting at 11am, and 3pm, and that will also be the programme for their other doubleheaders. 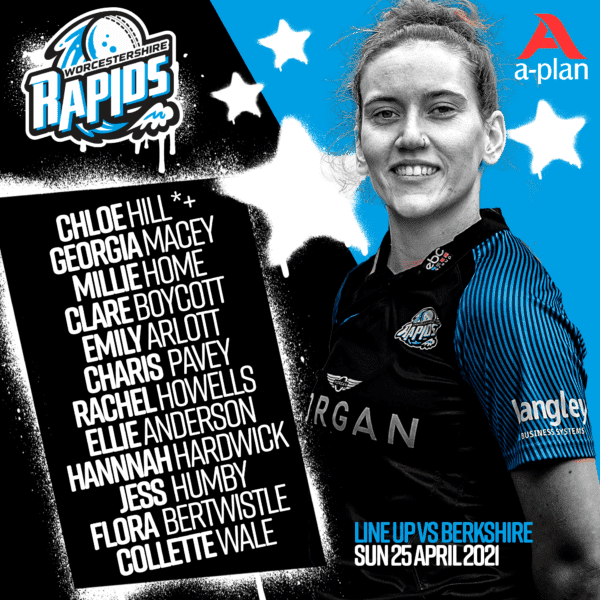