WCCSA PLAYER OF THE MONTH: APRIL 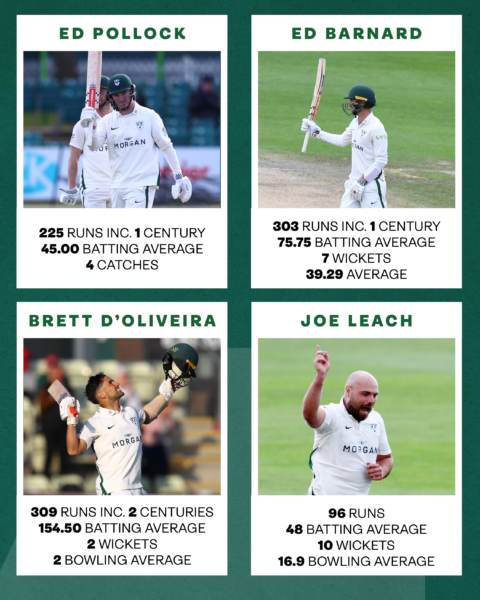 A four-player shortlist will be drawn up following each month during the season from which the Player of the Month can be voted for.

Voting is now open for April’s Player Of The Month, and there have been some outstanding individual performances during the early part of the season.

D’Oliveira could not have made a better start to his reign as Club Captain with unbeaten centuries against Leicestershire at the Uptonsteel County Ground and Sussex at New Road.

Pollock had never played LV=Insurance County Championship cricket until he joined Worcestershire, but he responded by hitting a century in the second innings against Leicestershire and 77 off 74 balls versus Sussex.

Leach has continued the form he showed with the ball at the tail-end of last summer with four-wicket hauls in the first innings against Leicestershire and Sussex and a responsible 70 in the opening game of the campaign.

Barnard backed up his excellent form with the bat in 2021 with half-centuries against Leicestershire and Sussex before a magnificent career-best 163 not out versus Nottinghamshire at Trent Bridge and picking up useful wickets.

Members and supporters have until midnight on Thursday, May 5, to vote online for their choice.

The winner will be announced during the home County Championship match with Durham, beginning on Thursday (May 5) and presented with a trophy on the outfield at some point in the game.