VOTING UNDERWAY FOR SUPPORTERS’ ASSOCIATION PLAYER OF THE MONTH FOR MAY

New Club Captain Brett D’Oliveira was the runaway winner of the inaugural award for April, and a four-player shortlist for May has now been drawn up. 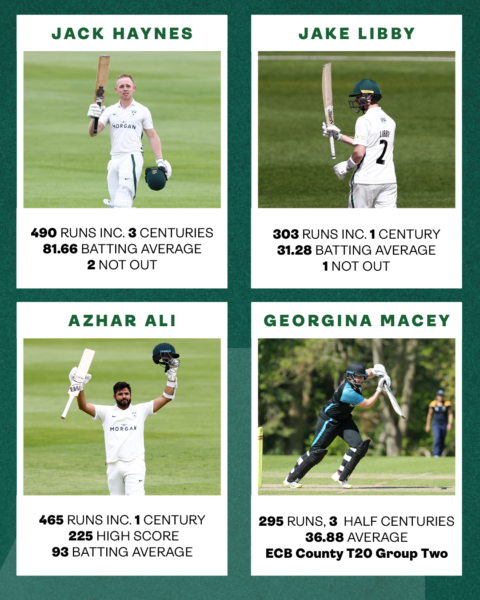 Haynes scored his maiden first-class hundred in the LV=Insurance County Championship match with Durham at New Road and followed it up with hundreds in the next two games versus Derbyshire and Leicestershire.

He acknowledged the influence on his game of Azhar, who was a model of consistency with three fifty-plus scores in a row before a magnificent 225 in the innings win against Leicestershire at New Road.

Libby enjoyed two prolific seasons after his move from Nottinghamshire, and he scored his first century of 2022 during the drawn Championship encounter with Derbyshire at the Incora County Ground.

Opener Macey was a key performer in the Women’s Rapids, winning the ECB County T20 Group Two with three half-centuries, and she finished as the second-highest scorer in the entire eight-group competition.

Members and supporters have until midnight on Saturday, June 4, to vote online for their choice.

The winner will be announced during the home Vitality Blast match with Leicestershire on the following day (Sunday, June 5) and presented with a trophy on the outfield.