T20 RECORD MAKER DARYL MITCHELL IS “THREE CRICKETERS IN ONE”

Daryl Mitchell was praised as being “three cricketers in one” as he became the first Worcestershire Rapids player to take 100 wickets in the Vitality Blast.

Mitchell reached three figures with the scalp of Derbyshire Falcons batsman Leus du Plooy in the 14 run success at the Incora County Ground.

It came 16 years after Mitchell’s first T20 wicket for the wicket in Somerset’s Carl Gazzard at Taunton in June 2005. 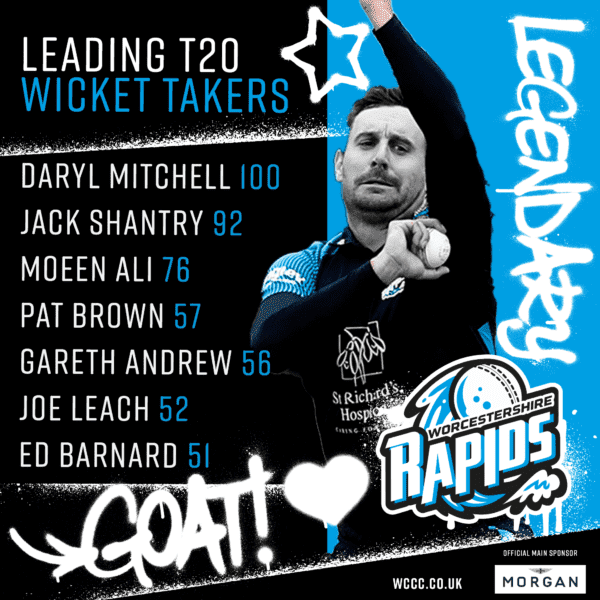 Ironically, three players who featured in that game in Mitchell, his then Worcestershire team-mate Gareth Batty – now back at Surrey – and Somerset batsmen James Hildreth are still playing first-team cricket more than a decade and a half later.

“He is three cricketers in one. He opens the batting in the red ball game, has done a bit of everything in the 50 over competition, and, for T20, we mainly use him for that slow bowler role in the middle.

“But his fielding is also exceptional, and his experience and tactical knowledge, the way he manages a game, is exactly what we need at times.

“It is great having him and other experienced players out there, like Riki (Wessels), who was throwing himself about in the dirt, fielding from long-on to long-on each other on a quick and bumpy outfield.”

Congratulations are also due to all-rounder Ed Barnard who has become the seventh Rapids player to take 50 or more Blast wickets.