“SPECIAL FEELING” FOR JAKE AFTER MARATHON EFFORT AGAINST CHAMPIONS

Worcestershire CCC opener Jake Libby admitted to having a “pretty special” feeling after his 12-hour marathon innings and being on the field for all four days against Essex at Chelmsford.

Libby carried his bat for a magnificent 180 not out spanning three days as the County recovered from being 43-4 in reply to Essex’s 490-9 to total 475 in the drawn encounter.

His 724-minute knock is one of the longest in County Championship history, and Libby said having the support of Ed Barnard and Dillon Pennington, when scoring maiden centuries and half-centuries respectively at the other end, helped drive him on.

Libby said: “I think it is the first time I have carried the bat. It is a special game for me personally but a long four days.

“I’m sure we can find a few minutes from somewhere to give me the record [most minutes in a County Championship innings], but it is a good achievement.

“I have never batted so long! It is pretty special. 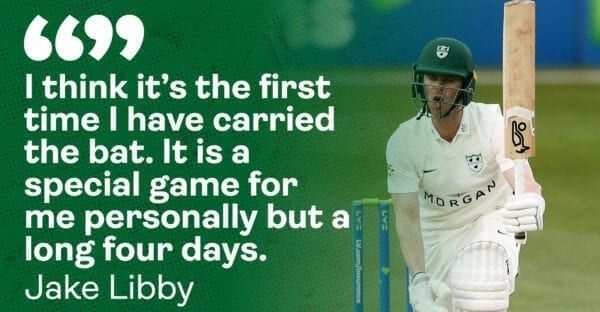 “I tried to face each ball as it comes and break it down. Batting with different people excites you, like batting Ed through to his first hundred and Dillon to his first fifty.

“You keep batting every ball and just try and keep going.”

Libby was delighted with how Worcestershire recovered to pick up 12 points against the reigning champions.

He said: “Essex are the champions and probably the best team in the country, with the best batting and bowling line-ups.

“If you offered this result to us when we were 32 for three, then realistically, we walk away from here with a smile on our face, and it almost feels like a bit of a win.

“We rocked up this morning, and Essex still had a sniff of winning the game if we lost a cluster of wickets early on, so we went into today trying to bat time while putting a few runs on the board.”