Kadeer top scored for Smethwick, smashing 56 off just 40 balls as his side overcame Worcestershire Academy by 7 wickets to win the trophy for the first time in the Club’s history. 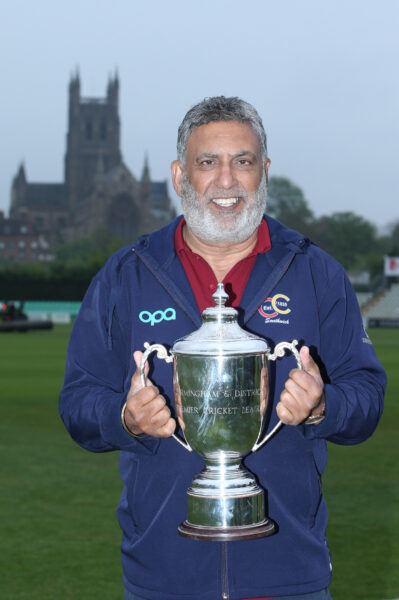 He said: “To win this trophy for the first time, I am delighted and winning it on Worcestershire’s home ground is amazing.

“The hospitality here has been great all day, and the people at the ground have made us so welcome.

Speaking of Kadeer Ali, who is also 2nd XI Coach at Worcestershire, Sandhu added, “He is the one who makes the team play. He is the one guy everyone looks up to.

“This guy is so professional. He is the reason we are doing so well. He keeps the team going and is scoring all the runs.

“I think without him, we would have really struggled. This guy is something special.”

Mr Sandhu felt it was important a new look Smethwick side lifted the Graham Williamson Trophy, and he is hoping for Birmingham & District Premier League title honours.

He said: “We have a lot of new players and, to win with these guys, was very important because, by winning a tournament, it shows the team have gelled together.

“It also gives them confidence playing together going forward. Had we lost here, people would have been saying ‘is this team good enough?’.
“In my 21 years here, the target has always been to go all the way in the Birmingham League. It is our aim and ambition.”

Kevin Sharp, Worcestershire’s Head of Coaching and Player Development, said: “It is priceless for Worcestershire to be hosting this sort of fixture.

“Just looking at our own Academy lads, the majority of this team would not have played here before.

“What we want is for these lads to come through into Second Eleven cricket and eventually become professional cricketers.

“If you can give them the opportunity to play at New Road, on a first-class cricket ground, it can only help their development.

“From that viewpoint, it is absolutely priceless.

“The bigger picture is that it’s fantastic we’ve been able to make this venue available today and for the club to invite Smethwick CC here and all their supporters.

“Just a wonderful opportunity for everyone.”