Assistant-Coach Alan Richardson is delighted with the progress being made by Worcestershire Rapids batsman Jack Haynes and is backing him to score centuries in “bucketloads” during his career.

Haynes demonstrated his growing maturity as a player with 77 to help lay the platform for Sunday’s memorable win over Kent Spitfires in the Royal London Cup. 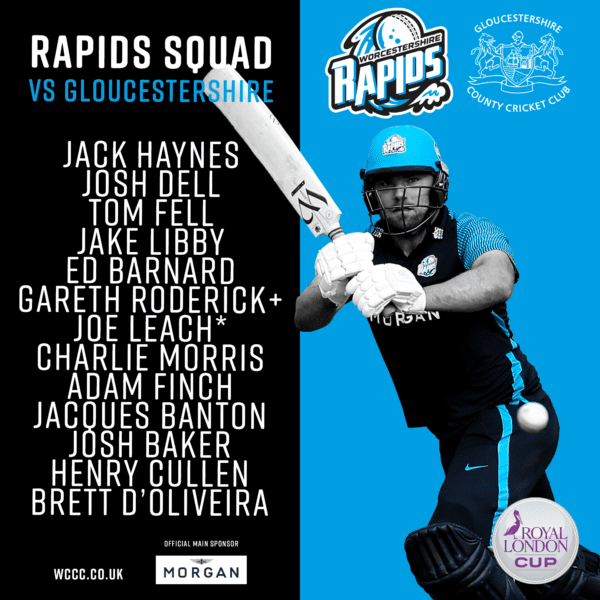 It followed on from his 87 versus Warwickshire and 97 against Derbyshire in the LV=Insurance County Championship.

He continues to make encouraging progress for someone who is still only 20, and Richardson believes his debut hundred when it arrives will be the first of many.

Richardson, who is overseeing the Royal London Cup campaign in tandem with Kadeer, said: “I think there is far more to come from Jack. He has shown some really good signs in red ball and glimpses in white ball.

“It was good to see him on Sunday bat for a length of time.

“If he just plays the way he can, and the way we know he can, the hundreds will come – and they will come in bucketloads as well.”

Rapids wicket-keeper-batsman Gareth Roderick will face his former county, Gloucestershire, for the first time since moving to New Road in tomorrow’s One-Day Cup encounter at Bristol.

He is part of a 13 strong squad named for the away double header with Gloucestershire and then Essex on Thursday, with the team travelling to Chelmsford immediately after the completion of Tuesday’s game.

Opener Brett D’Oliveira is expected to be fit after missing the win over Kent with a sore shoulder and is part of the squad.

Paceman Ben Parker has been released from the squad to join up with the Midlands side for the Super Fours at the National Performance Centre, Loughborough.

But fellow youngsters in spinner Josh Baker, all-rounder Jacques Banton, and keeper-batsman Henry Cullen remain part of the squad and gain great experience in their development.

Richardson said: “All these games will be a real challenge, which is good. Our average age on Sunday was 24, and the average amount of games per player is 20 50-over games.

“That was the first 50 over game for Joe (Leach) since 2018, and we had people like Josh and Jacques making their 50 over debuts.”