REMEMBERING WORCESTERSHIRE CCC PLAYERS WHO LOST THEIR LIVES IN CONFLICT

As we prepare for Armistice Day on Wednesday, November 11, it is an appropriate time to honour the Worcestershire CCC cricketers who lost their lives during the two Wars.

Thirteen players who represented the County made the ultimate sacrifice during action for their country.

Ten were killed during the 1914-1918 conflict and another three from 1939-1945 while at least four players were held as prisoners of war.

Many more Worcestershire CCC players, officials and ground-staff were involved in either war and survived, and some went onto resume their careers in the game.

All-rounder Frank Chester lost an arm during the fighting in Mesopotamia during World War One after appearing in 54 matches for Worcestershire, scoring four centuries and taking 81 wickets.

But he returned to the game as a highly respected umpire and stood in 48 Tests either side of the Second World War.

Another survivor from World Waw One was JW ‘Cecil’ Turner who played 46 games for Worcestershire.

He won the Military Cross during the conflict and was a Cambridge University academic of international fame for law.

Also one of his daughters married a future Archbishop of Canterbury in Robert Runcie who held the prominent role from 1980-1991.

Captain CV Beresford of the 3rd Batallion of the Worcestershire Regiment was a POW from 1914 after being severely wounded at the Battle Of Le Gateau.

He was sent to a temporary hospital which then fell into the hands of the Germans, and his experience as a prisoner of war can be found on the Worcestershire Regiment official website.

But after the war, Captain Beresford went onto become Worcestershire CCC Secretary for seven years (1920-1927) and lived until the age of 91.

The Worcestershire CCC players who lost their lives in the First World War were:

The Worcestershire CCC cricketers who lost their lives during World Ward Two were: 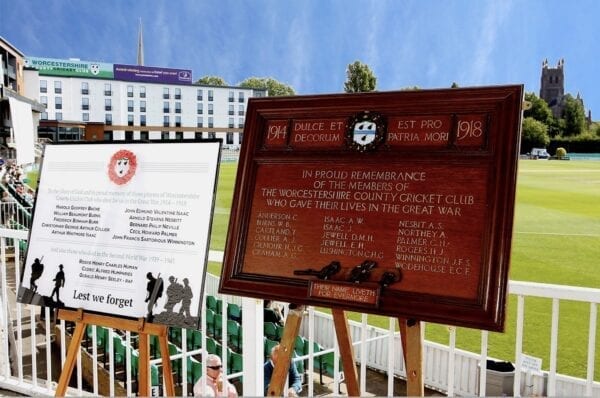