The shirts worn by the Rapids in their superb seven-wicket Vitality Blast win over Leicestershire Foxes at New Road are being auctioned to raise funds for St. Richard’s Hospice. They are Worcestershire CCC’s 2021 Official Charity Partner.

Each player has donated and signed their shirt, and in addition to the individual player shirts, there is a unique shirt signed by the whole squad. The public can now bid for all items through an online auction. 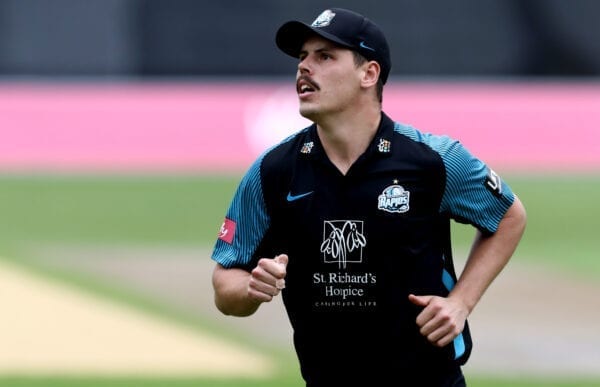 The Hospice logo was displayed across the shirts of the Rapids players, and all money raised from the auction will provide additional funds to support the work of St. Richard’s Hospice in the local community.

David Hoskins, Worcestershire CCC’s Head of Commercial and Operations, said: “It’s brilliant that the players are donating their signed shirts to the auction to support St. Richard’s Hospice.

“We are really pleased to be raising funds for the hospice in this way and a huge message of thanks to Morgan Motor Company for helping us support this initiative and giving up their shirt sponsorship for the Leicestershire Foxes Vitality Blast fixture.”

If you want to bid for a shirt, then please visit wccc.co.uk/auction.

Worcestershire CCC has several initiatives planned throughout the year to help raise funds and the Worcester-based charity’s profile.

The generous gesture from The Morgan Motor Company comes in direct response to a challenging year for St Richards Hospice, who have missed out on a large amount of expected income due to the Covid-19 pandemic.

Despite these challenges, St Richards Hospice has continued to support many people in need across Worcestershire.