RAPIDS LOOKING TO TURN UP THE PRESSURE WITH HOME VICTORY

Kadeer Ali says Worcestershire Rapids will look to turn up the pressure on the other teams battling to reach the Royal London Cup knockout stages by winning their final game against current group leaders Durham.

The Rapids are currently lying in fourth spot after Sunday’s wash-out against Lancashire Lightning at Emirates Old Trafford denied them the chance to push for victory. 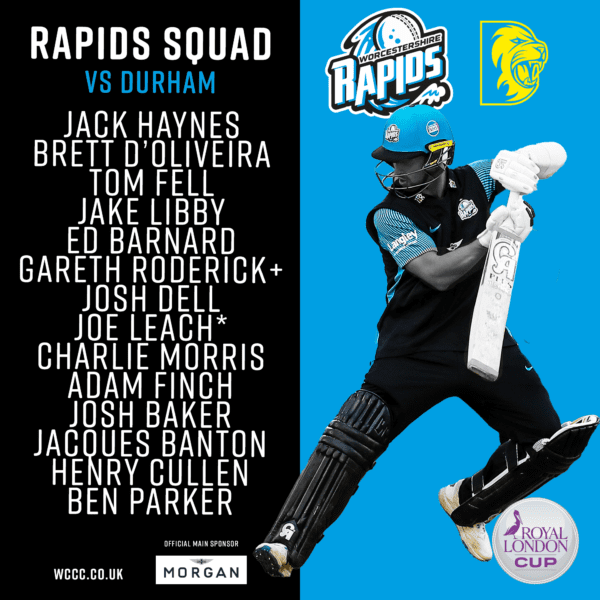 A win over Durham would lift the Rapids onto nine points, but they would then have to wait and see how the other teams in the group fared in their last fixtures on Thursday.

Working in tandem with Assistant Coach Alan Richardson in overseeing the Royal London Cup campaign, Kadeer said: “Durham are a good side and have been playing very well. We have already shown if we play to our potential, we can beat anyone, so we must turn up, be brave and take them on.

“We’ve got to win. That’s all we can do, and then see if the other results go our way.

“Is the idea to win and put pressure on the other teams? Exactly. I think they are all playing on Thursday. All we can do is win.”

The Rapids will be looking to regain the superb form they showed in the opening phase of the competition.

Kadeer said: “We had a brilliant start, won a couple of close games, and played outstandingly well against Essex.

“The last three games, we haven’t played as well, and we know that but we have to stay confident, and one win could still get us through.

“A couple of the losses were close games and could have gone either way towards the end.”

Kadeer has been delighted with the form of opener Jack Haynes after working with him earlier in the season in his role as Seconds coach.

He said: “Jack has got a lot of potential, works extremely hard on his game, and earlier in the season, he played well in the Seconds.

“The biggest thing was for him to go and get some big runs and put pressure on to get back into the side – which he did.

“He was unfortunate to get injured with his ankle, but he has done pretty well on return.

“He got a brilliant hundred against Essex, where Brett (D’Oliveira) and Jack, who have enjoyed opening the batting together, were outstanding, and it is great to see him doing well.”