RAPIDS AIMING TO CEMENT TOP-FOUR SPOT AGAINST LIGHTNING AND FALCONS

Worcestershire Rapids will be looking to build on their top-four spot in the Vitality Blast North Group as they take on Lancashire Lightning and Derbyshire Falcons in the space of 24 hours.

The Rapids have climbed back into one of the qualifying positions for the knockout stages with five games to go, starting with the meeting with the Lightning at Emirates Old Trafford on Thursday evening.

They will select from a 13 strong squad as they aim to pull off a third successive win after impressive performances against Durham and Leicestershire Foxes at New Road. 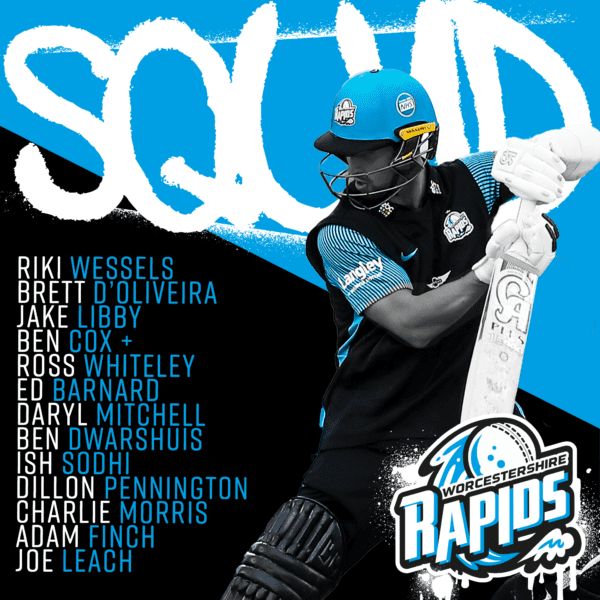 Head Coach Alex Gidman said: “It’s been a good competition so far, with some very tough cricket. We have played against some exceptional teams and exceptional individuals, so being in this position is very encouraging, leading to the end of the group stages.

“As always, we will try and focus on the sort of cricket that we are trying to play.

“It’s been very evident that, when we get our game together, we have been a very impressive team.

“But, like anyone in our group, everyone is capable of beating each other, as we have seen, so we take no game for granted, and I know the guys will perform as best as they can.”

The Rapids will choose from the 11 players against Leicestershire plus Adam Finch and Club Captain Joe Leach for the two games against the Lightning and the Falcons.

Paceman Josh Tongue is again ruled out with a recurrence of a shoulder injury, but batsman Jack Haynes is close to fitness after his ankle injury (see separate story).