Worcestershire CCC’s prolific batsman, Jake Libby, has a signed contract extension until the end of the 2024 season and believes he can achieve his personal goals – including international recognition – and team ambitions at New Road.

Libby had 12 months remaining of the three-year deal he signed after moving from Nottinghamshire at the end of the 2019 campaign.

But now the 28-year-old has committed himself to Worcestershire for at least the next three years until the end of the 2024 season.

Libby has been in superb form and a model of consistency in all formats of the game since arriving at New Road and has been appointed red ball vice-captain after making a positive contribution on and off the pitch.

He said: “It’s been an excellent move for me coming to Worcestershire, and I was always really keen to stay and will hopefully continue to get better.

“For me, to sign for another three years is really exciting. I’m looking forward to it.

“Personally, since joining, it has gone well in all three formats, and I think we are making progress as a team as well.

“I think we can challenge for trophies and push ourselves to be where we want to be in the coming years.

“This group can go onto compete, in whatever format, as a Division One club as that’s how I see the next three or four years.”

Libby made the switch from Nottinghamshire at the end of the 2019 season.

He said: “I’ve felt a lot more settled here. I’ve obviously done well, which has helped, but I feel it was my spot to lose here in terms of, if I play good cricket, I will play.

“I certainly feel like I’m more of a senior player, and I’ve enjoyed playing under Joe Leach.

“I think he leads the team well, and the combination of him and Alex has worked well.

“Alex, for me, has been really big. I think he keeps things simple and has helped my game a lot.” 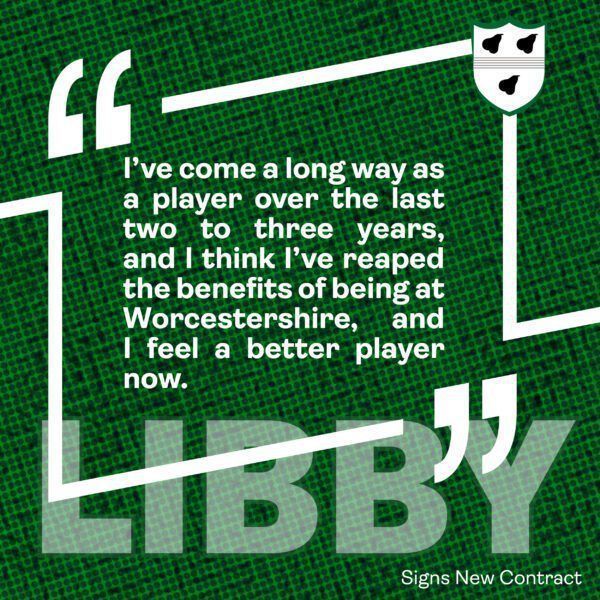 Libby admits his approach towards international cricket has altered since moving to New Road.

He said: “I’m 28 now. Two or three years ago, I wouldn’t even be thinking of international cricket.

“I’ve come a long way as a player over the last two to three years, and I think I’ve reaped the benefits of being at Worcestershire, and I feel a better player now.

“I do have international ambitions, and I think I can achieve them at Worcestershire, but I am also aware that I need to keep improving and work on a few things to get to that level.

“I’m not going to put too much pressure on myself re international cricket and will keep on doing what I am for Worcestershire, and I think that side of things takes care of itself.”

Worcestershire CCC Head Coach, Alex Gidman, said: “Really, really pleased. Jake has made a significant contribution to the team since he joined us a couple of years ago and has become an integral part of the group.

“Delighted that he wants to continue with us. It is great for us as a club and as a group.

“He has got some great qualities, some outstanding characteristics, on and off the pitch. He adds a lot to our group so it is a natural progression for him to take up a leadership role (as vice-captain).

“Jake decided to make a move. He showed some good qualities while at Nottinghamshire but didn’t always get the opportunities he perhaps felt he needed.

“For us, he is getting more opportunities and has shown the quality to back that up and has played extremely well for us.”

He said: “We are delighted. Since we signed Jake from Nottinghamshire, he has done nothing but improve. He has been incredibly consistent and has fitted into our dressing room perfectly.

“He gets on really well with the boys, and he has produced the goods on the field in all disciplines.

“We are looking forward to a long association with Jake. He has gone on record to say how much he has enjoyed his time here, and we have loved having him.

“He has got the respect of everyone, but also, we have seen little things in him that indicate in the long term, he could make a future captain.

“We are giving him little bits of responsibility to take forward, and we will see how he develops with that.”

In 2020 Libby was the country’s leading run-scorer in the Bob Willis Trophy group stages, with 498 runs. This summer, only Durham’s David Bedingham has surpassed his tally of 798 in the LV=Insurance County Championship.

Libby also topped the Rapids 2020 and 2021 averages in the Vitality Blast.