PAUL EDWARDS COLUMN: AND NOW D’OLIVEIRA IS LEADING HIS WORCESTERSHIRE TEAM ONTO THE FIELD…

Let us look forward for a moment. It is April 7 and Worcestershire are about to begin their County Championship programme at Leicester. A supporter living in say, Evesham, turns on the radio just in time for the start of play and hears the following:

Will any more evocative words be spoken this season? I doubt it, and no one reading this article needs me to explain why. Nor will the moment be lost on the visiting skipper. For all that he has captained the county before, Brett D’Oliveira will surely spare more than a thought for his father and grandfather on the morning when the competitive stuff begins. Before long, though, other concerns will obtrude: Has the wind changed? Should a particular bowler be given another over? If so, should the extra slip be kept in? Is mid-off a shade too straight and long leg a couple of yards too fine? The number of tiny choices a skipper makes in the course of three sessions’ cricket must run into the high hundreds. And almost every day’s play until the end of September will be similarly challenging, yet utterly different.

Such thoughts may seem distant in late January when the trees in front of the cathedral are still bare and a spiteful wind knifes across New Road. But any professional cricketer will tell you that the season comes quickly enough once you get past New Year. Net sessions at Malvern have that extra urgency and the time before the first practice match – Oxford University in The Parks on March 23 – can be measured in weeks, not months. For the time being, though, life is still a trifle more relaxed.

“Part of my job at the moment consists in rallying the lads and filtering messages down from the coaches,” D’Oliveira says, as we enjoy some half-hearted winter sunshine. “There are a lot more meetings than I’m used to but I’m trying to put my own stamp on the job and offer my own thoughts. There are tactical meetings and discussions about training methods we want to take into games. I’ll be asked my opinion on any overseas signings and then the powers that be will make the final call.”

Worcestershire’s new skipper also says that some decisions are above his pay grade and I resist the temptation to suggest that very little will fall into that category when April arrives and the first Championship game begins. But he takes the point when I observe that he is the bloke who will be captaining any new recruits. “The biggest things from my point of view will be to add absolute quality rather than obstruct the path of a younger player who’s coming through,” he says. It is a very Worcestershire way of looking at things and he warms to the theme.

“One of the main points I’ve made is that this is a family club, it’s very intimate,” he says. “The city is close and you get a lot of people at the matches who’ve been coming here for years. It’s important to relay that back to the younger members of the squad and encourage them to cherish those values. When the members are separated from the players, you lose that intimacy, so Covid’s been a challenge over the last couple of years. The hope is that the two groups will become closer this season and the supporters can talk to the players a little more.”

Then, of course, there is the question of captaining Brett D’Oliveira. The history of the game is strewn with skippers who either bowled too much or never brought themselves on. It is less likely that D’Oliveira’s leggies will be needed in April or maybe May, but if we have a dry spring and Worcestershire are pressing for a last-day victory, who knows?

“It’s particularly difficult with spinners because you probably don’t play much of a part in the first third of the season but then you might have more of a role in the back end of things,” he agrees. “Yes, it will be a challenge to judge when to bowl myself but the good thing for me is that I have a good core of senior players around me – Jake Libby, Joe Leach, Ben Cox – and they will be there to give me advice.”

And during short-form games D’Oliveira will be able to learn from a cricketer who is famous for his calmness.

“What I’ve noticed with Moeen in T20 matches – but also Joe in the Championship – is that their characters never changed regardless of captaincy,” he says. “They remained the same people and were always very calm and approachable. There may be huge issues to deal with on the field but they never allowed that to show. Moeen always says that batsmen often have two or three more balls than they imagine in T20 games. You may have to react quite quickly but you can still think slowly, if that makes sense.”

I say it makes perfect sense. I’ve never seen a successful cricket team that rushed about the field. Fine captains are not harassed by events. They anticipate or, at worst, respond to them. D’Oliveira’s job will be to communicate that sense of tranquil purposefulness to the younger members of a side that will be without Daryl Mitchell, Riki Wessels, Ross Whiteley.

“We’ve gone through a small transition over the last twelve months and it’s a question of passing on values and giving players the confidence to go out there and perform,” he agrees. “I think captaincy is very much a gut feel thing and the advice I’ve received is that you have to go with that.

“People have asked me how I’ll measure success and I simply say that I want us to make the steps forward in red-ball cricket of which I think we’re capable. I’d like to lead the team so that they’re in a better place than they were last season. There are some good teams in Division Two and it will be a challenge to us to try and turn them over.

“If pressed, I’d prefer promotion to winning the Blast. I know the red-ball group and I have a view of where I’d like to take them. Winning promotion is part of that and it would be a huge step for them. The longer term goal is to get into the top half of Division One and then win the title. This is not meant with any arrogance at all but we’ve already won the T20.” 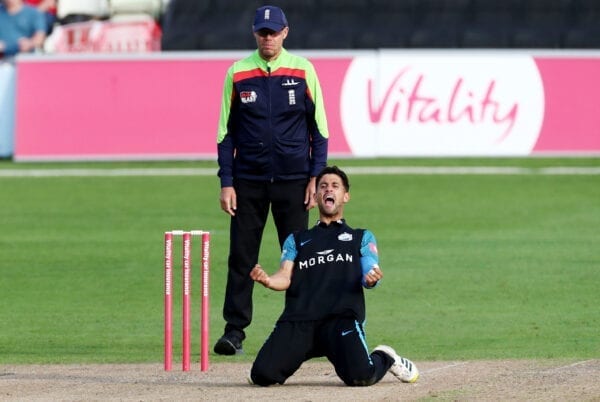 As so often with successful and happy clubs, I end our chat with the feeling that this is, indeed, all part of a family thing. The team is a type of family and the spectators share their joys. Of course, there are rough days and difficult seasons but the invisible cords that bind a bunch of players together generally remain strong. Ensuring that it remains so will be one of D’Oliveira’s responsibilities during the summer to come. He probably realised that soon after Alex Gidman informed him that he would be the first D’Oliveira to see his name on the list of captains in the Graeme Hick Pavilion. But when Worcestershire’s new skipper is enjoying his vital days off, there will be a fourth generation of the family ready to remind him that professional cricket doesn’t matter to everyone.

“I’ll make time to get away from the game,” says D’Oliveira. “I think I’ll have to. As much as you get absorbed in cricket, you have to judge when to switch off. I have a four-year-old son and when I get home, he won’t care how Worcestershire got on. He’ll be playing his own cricket or swinging a golf club. If I have a really bad day, his smile or his laugh will change my perspective on things.”

But there is also that necessary sliver of grit in the character of Worcestershire’s new skipper. In its way it is a reminder of how tough and competitive professional cricket can be. It is revealed when I finally ask him the very whiskery question about whether he feels it a responsibility to be the third D’Oliveira to be playing for the county.

“I like answering that one because I’ve never felt like the pressure was too much,” he replies.  “I’m my own person and I want to beat them. Being club captain was a real thing for me because that was something neither my grandfather nor father did. Scoring more runs than my dad will be a real tick in the box.”

I rather think both Basil and Damian would smile in recognition at that.

Paul Edwards is a freelance cricket writer, writing as a guest contributor for Worcestershire County Cricket Club. He has written for the Times, ESPNcricinfo, Wisden, Southport Visiter and other publications.