Worcestershire CCC all-rounder Joe Leach has signed a new three-year contract until the end of the 2024 season and is relishing the next phase of his career.

Leach had one year remaining of his current deal but has extended his stay at New Road by at least another two years.

He opted to relinquish his role as Club Captain after five years at the end of the 2021 season but feels he has still much to offer as a player and as a senior member of the squad.

Leach finished last summer in superb form, making excellent contributions with the ball and bat – his 10th season since making his first-team debut in the County Championship derby against Warwickshire at Edgbaston in 2012.

He has taken 368 first class wickets at an average of 26.51 and been Worcestershire’s leading wicket-taker on six occasions, in addition to scoring 3,296 first class runs.

Leach is also in the top six of Worcestershire’s wicket-takers in T20 cricket with 52 victims.

He said: “I’m excited to commit myself to the club for another three years. I feel like I’ve got a lot to give.

“I’m delighted to commit my future to the club, and hopefully, we can make it a successful period.

“I don’t see this as being a winding down phase of my career at all. I’ve just come off playing what is probably the best cricket of my career in September, and I’m looking forward to getting stuck in.

“It will be a slightly different role, but one I’m looking forward to in being a senior member in the group.

“It will be slightly different to being captain but one where I can offer my skills as a leader to the group and enjoy the next three years as a minimum period.” 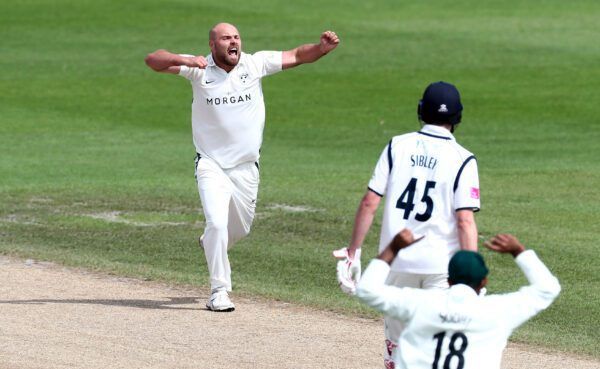 “He is a great team man and someone who is still very valuable to the group, so delighted he has delighted for a longer period.

“Every team craves experience at the moment. There are a lot of young cricketers around, and we have a particularly young bowling group.

“To have that experience and level-headedness that Joe has, alongside his skill and determination as a performer, is really, really important.

“Although Joe is no longer the captain, he will still be a fantastic leader within the group. He will be very prevalent with everything we do, on and off the pitch, and that is really important because he’s had some outstanding experiences as captain.

“It is crucial we have that core group of experienced players.”

𝟭𝟬 𝗗𝗔𝗬𝗦 𝗢𝗙 𝗧𝗛𝗘 𝗩𝗜𝗧𝗔𝗟𝗜𝗧𝗬 𝗕𝗟𝗔𝗦𝗧 💥 With eight days to go we present you some of Moeen Ali's biggest sixes from his tw… https://t.co/FfTK7zjvv3

📺 LIVE STREAM Play is about to get underway at New Road as our second XI take on Glamorgan in a T20 Match Centre… https://t.co/pH8E9RpETM

𝗠𝗔𝗧𝗖𝗛 𝗗𝗥𝗔𝗪𝗡 The players meet in the middle and shake hands on a draw. 14 points each as Jake Libby finishes a mara… https://t.co/GW1drDdwg7

💯 𝗙𝗢𝗥 𝗝𝗔𝗞𝗘 𝗟𝗜𝗕𝗕𝗬 JAKE LIBBY HAS HIS FIRST 100 OF THE SEASON 🙌 He picks up the single he needs to move onto three… https://t.co/GdhaumaeMC

Wicket | Azhar Ali lbw b Thomson 60 Azhar Ali's innings comes to an end, as he's struck on the pads by Thomson fro… https://t.co/LwV9EEYO1Z

The penultimate session of the match is underway, as Jake Libby and Azhar Ali make their way out after lunch. 📺 Ma… https://t.co/DknByN5rqe

𝗟𝗨𝗡𝗖𝗛 | 𝗗𝗔𝗬 𝗙𝗢𝗨𝗥 🥪 A very solid session for our batters, as Jake Libby brought up his half century, supported by A… https://t.co/MbCJsXvShp