JAKE: RAPIDS STILL A FORCE WITHOUT MOEEN AS THEY PREPARE FOR HECTIC WEEK

Jake Libby says Worcestershire Rapids have the strength in depth to overcome the loss of captain Moeen Ali to England duty as they prepare for a hectic week in their bid to reach the knockout stages.

The Rapids have picked up six points from their opening five games and are well placed in the battle to finish in the top four of the Central Group.

Moeen has ended his current five-game stint to join England for the T20I series against Sri Lanka.

Now, after a weekend off to recharge their batteries, the Rapids squad will gear up for four games in six days – away to Notts Outlaws on Tuesday and Yorkshire Vikings 24 hours later before home games versus Durham (Friday) and Leicestershire Foxes (Sunday).

Libby said: “We are happy with where we are at the minute. We’ve had some good performances. We are relatively satisfied.

“Mo is a massive loss to us. He’s two players in one, so reliable with the ball and an absolute danger with the bat, a match-winner, a great leader and a calming influence. 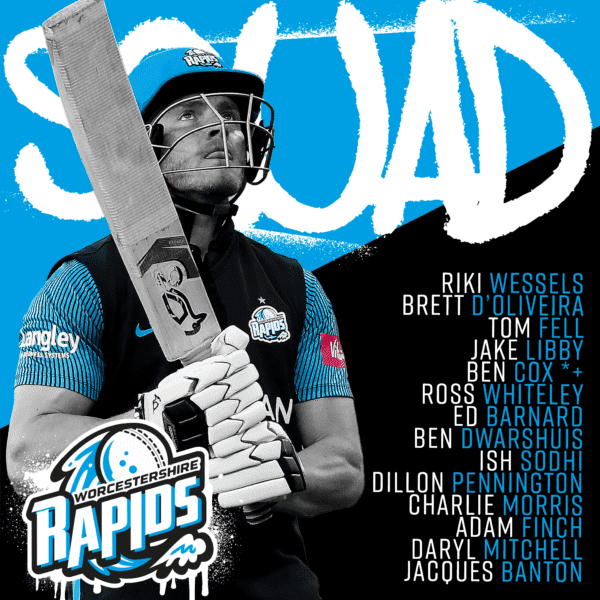 “But we are going to have players that will come in. It will give someone else an opportunity. I know we’ve got an excellent squad, and I have every faith in whoever comes in to do a job.

“Can the side still challenge without Moeen? Absolutely. We have all eyes on getting to finals day this year, and we’ve started nicely, but that is all; it is at the minute.

We know there is a lot of cricket to go still, and I think next week, four games, will be a big week for us as a team and will sort of define how our season goes.

“We are looking forward to it and will prepare as well as we can.

“When you’ve got 14 group games, you can afford to have blips here and there, but we’ve started well, played some good stuff.”

He said: “We know it’s going to be a challenging game there, but there is a good spirit in the camp.

“We had a good game against Notts last time, so we can use that
momentum going forward, and I think that is what T20 is all about, trying to get momentum and taking it into your next game.

“They come thick and fast, so that is what we will be trying to do next week.

“It’s always nice to go back to Trent Bridge. It’s a shame it’s not a full house but it will be a great atmosphere nonetheless. It will be nice if we can walk away with a win.”

In addition to Moeen, the Rapids will also be without Josh Tongue for the two games against the Outlaws and the Vikings

Head Coach Alex Gidman confirmed that the paceman had suffered a recurrence of his shoulder problem while batsman Jack Haynes is still unavailable with his ankle setback.

Paceman Adam Finch and batsman Jacques Banton, who last week signed a rookie contract for the remainder of the summer, are added to the squad for the Outlaws and Vikings games.