All-rounder Jacques Banton has signed a rookie contract with Worcestershire CCC for the remainder of the summer.

The 19-year-old – the brother of Somerset & England wicket-keeper batsman Tom Banton – was part of the Worcestershire Academy intake for 2018-2019 after switching from Warwickshire.

It followed on from the left arm spinner-right hand batsman being selected along with current first-team squad member Jack Haynes for the 2018 ‘Super Fours’ – the Under-17s equivalent of The Bunburys.

Two years ago, Banton, a former pupil at Bromsgrove School and King’s School, Taunton, demonstrated his potential with a remarkable innings for the Academy. 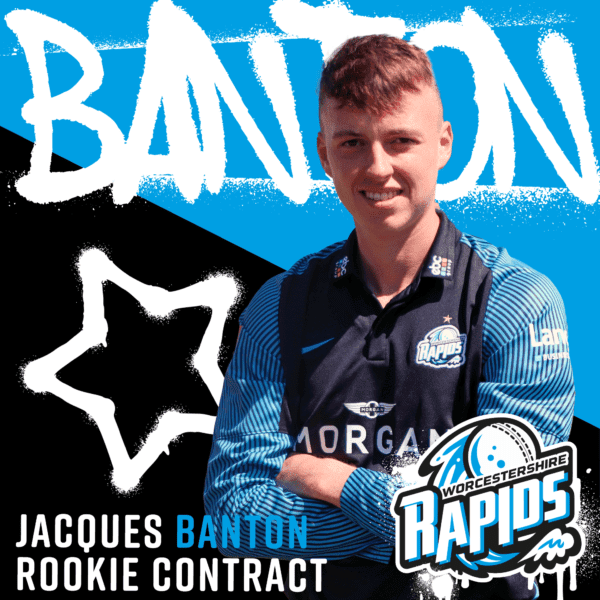 He smashed 139 not out off 70 balls against Ireland Under-19s at Barnt Green on the ground where he plays Birmingham Premier League cricket.

This summer, Banton has played three Second Eleven Championship matches and been a regular member of the side in the Seconds T20 competition.

His father, Colin Banton, played seven First Class and two List A games for Nottinghamshire in 1995.

Head Coach Alex Gidman confirmed: “Jacques Banton will be joining us for the rest of the summer on a rookie contract.

“He is a genuine all-rounder. He strikes the ball cleanly and has got quite a lot of nous about how he plays the game with both bat and ball.

“We are looking at bringing him on board to get him around the group, and it gives us another potential player for selection if needed.

“He has the same skill set as his brother Tom in being a powerful batsman, and they are both all-rounders but just in different ways.”

Banton said: “When I got the call (from Alex Gidman) to tell me, I felt emotional. It (the contract) is something I’ve always dreamed of.

“It will be great to be involved with the lads. I was doing 12th man duties for the Blast game against Lancashire and was involved in all the warm-ups, and it was brilliant.

“To go from club cricket to this is amazing, and I want to make the most of the opportunity I’ve been given.

“I’ve really enjoyed batting in the top three and bowling all my overs for the Seconds in T20 this summer.”