Home has joined the Rapids from local rivals Warwickshire for the entire T20 campaign.

She made an ideal start with scores of 33 and 88 not out in the two wins over Berkshire, sharing a stand of 101 with Hill in the second game.

Hill said: “A great signing. I trained with her all over the winter at Central Sparks, we spoke about it, and I said come on loan to Worcestershire, and you will get the chance to be batting at the top of the order and stake your claim.

“Myself and her then batted together in the second game for a 101 partnership, but we felt we were in first gear for long periods and were ticking over the scoreboard.

The Rapids won their opening two matches in impressive style against Berkshire CC at Falkland CC in Newbury on Sunday.

They collected eight points in the process and are level with Somerset and Warwickshire.

Staffordshire went down by 33 runs and then six wickets in their opening two encounters with Somerset.

The Rapids next two matches will get underway at 11am and 3pm, respectively.

Their squad includes Emily Arlott, who picked up two wickets when playing for England Academy against Sunrisers.

Hill said: “Emily is only getting better and better, and she has put on so much pace this winter and is bowling length to length, and it’s the strongest I’ve seen her bowl for a very long time.”

Ellie Anderson was selected for 12th man duties for the England Academy when they took on Central Sparks, and she is also part of a 12 strong squad. 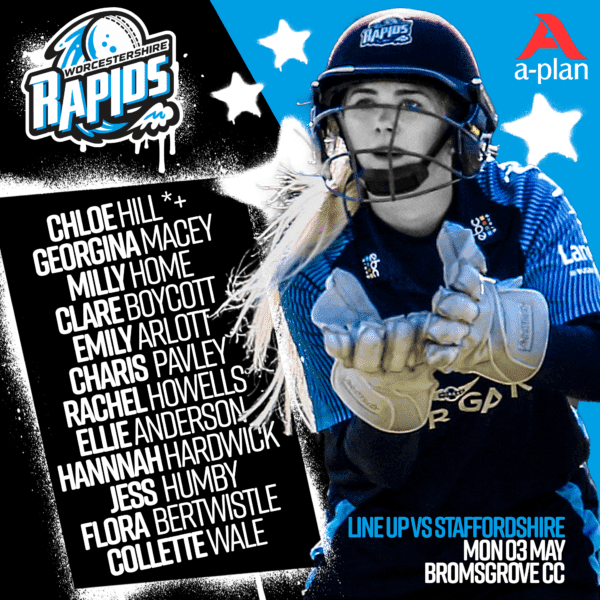