HEAD COACH: WORCESTERSHIRE IN “REALLY GOOD POSITION TO KICK ON” DURING 2022 SEASON

Head Coach Alex Gidman believes Worcestershire CCC are “in a good position to improve and kick on again” during the 2022 season, which will get underway with a block of six fixtures in the LV=Insurance County Championship.

New Worcestershire Club Captain Brett D’Oliveira and the squad launch their bid for glory on three fronts next summer with a trip to face Leicestershire for a Championship encounter starting 7 April.

After a week’s break from the action, members and supporters can see Worcestershire at New Road for the first time against Sussex from 21 to 24 April.

They will be looking to repeat the excellent form that saw them triumph over Leicestershire and Sussex during the final block of Championship cricket in September.

There is home Championship cricket to enjoy throughout the bulk of the summer, with fixtures taking place at New Road every month except August. 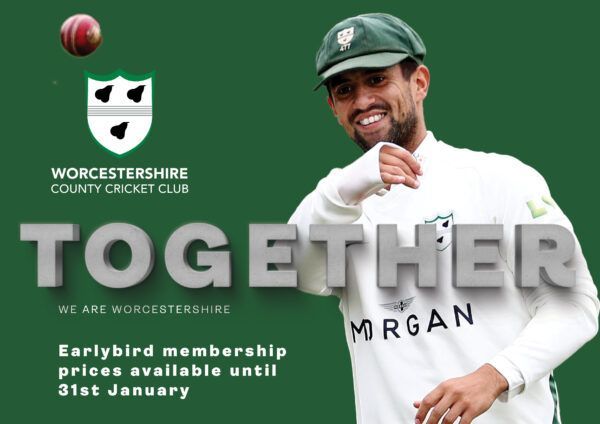 The eagerly awaited Vitality Blast home derby with Birmingham Bears will take place on Friday 3 June after a block of four away games in eight days for The Rapids, who came so close to reaching the knockout stages last summer.

The Rapids also produced some excellent performances in the Royal London Cup before being edged out of qualification. They will start their 2022 group against Kent at New Road on 2 August.

Gidman is looking for Worcestershire to add to the good and entertaining cricket they produced in all formats on many occasions in 2021 by turning some of those performances into victories.

He said: “It’s still January but, once the fixtures come out, it gives everyone that sense of excitement and buzz, knowing that the season is not a million miles away.

“I know we played some outstanding cricket last season, but equally the acknowledgement has to be, and it has been with the group, that we slipped up and didn’t quite make the most of some of the positions we got into.

“Certainly lots of great learning to be had from some of the cricket we played but equally learning from some of those tough experiences where we didn’t do quite enough to get over the line.

“I’ve said it before, we were one win away in each competition from having as good a season as we could have asked for last year, but that’s the fine lines of professional sport, isn’t it.

“The challenge is to keep developing and to try and turn a couple of the draws in Championship cricket and the losses in white-ball cricket into wins.”

D’Oliveira has captained Worcestershire in red-ball and white-ball formats before, but the game against Leicestershire at the Uptonsteel County Ground will be his first as leader in an official capacity.

Gidman said: “Looking forward to it from the team and the club perspective but, equally, for Brett, it will be a very exciting and proud moment for him.

“All the players, support staff and members will be right behind him.

“Really looking forward to getting going and picking up where we left off, particularly with those last couple of wins against Sussex and Leicestershire.

“It’s about marrying up all the good cricket we played last season and trying to start the season well.”

The Rapids have to face Yorkshire Vikings, Notts Outlaws, Lancashire Lightning and Durham in four successive away games from 25 May to 1 June.

Gidman said: “It’s going to be a very tough challenge but, if we flip it on its head and get some good results in those four games, then it puts us in good shape for the competition.

“We will certainly look at it in terms of what we can achieve rather than how challenging it might be.”

After the signing of Matthew Wade and Ed Pollock, Gidman believes the Rapids are getting back to the sort of strength in the squad in the Vitality Blast demonstrated when winning the competition in 2018 and finishing runners-up in 2019.

He said: “Looking back at the 2018 and 2019 squad, we lost a few of those players in the last year or two, but we feel we are getting back to somewhere near a team that is going to be as strong as what that team was.

“We are getting there. We’ve made some great signings and certainly feel we are going to be even more competitive than last year, where we came very close (to qualifying).”

Worcestershire will prepare for the new season with 11 days of cricket spanning four friendly matches, including a three-day game at Kidderminster against Durham UCCE beginning on 2 April.

Oxford UCCE (three days), Warwickshire (three) and Hampshire (two) will also provide the opposition at The Parks, Edgbaston and the Ageas Bowl, respectively.