Jack Haynes returns to the Worcestershire Rapids squad for Friday’s Vitality Blast derby with Birmingham Bears at New Road after recovering from an ankle injury.

Haynes suffered the setback during training and missed the LV=County Championship encounter with Durham and the opening 11 Blast North Group games.

But he is back in contention to face the Bears after proving his fitness with an unbeaten 177 for the Seconds in their Championship victory over Nottinghamshire at Lady Bay Sports Club in Nottingham. 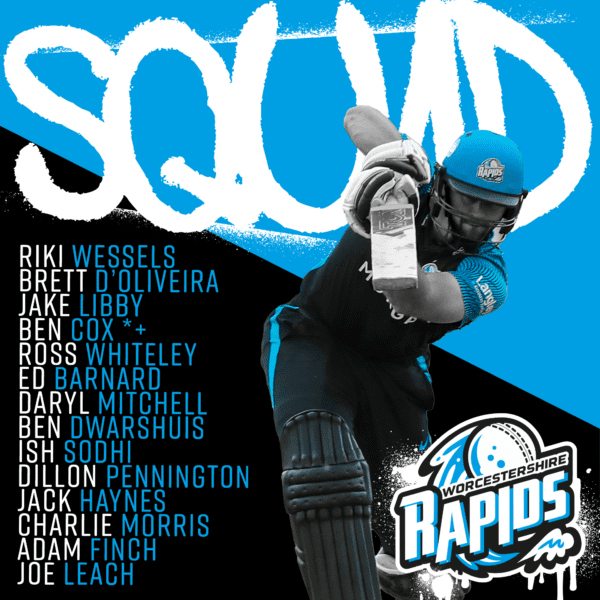 Head Coach Alex Gidman said: “Jack worked hard on his rehab and did everything in his power to get back as quickly as possible.

“He has done that and slotted back into form pretty quickly as well. We’re pleased he managed to get some time at the crease, but most importantly, it seems that the ankle held up pretty well.

“We just need to keep an eye on it for the next few days and just check everything is okay.”

Haynes is added to the 11 players who triumphed over Derbyshire Falcons last Friday, plus seam bowler Adam Finch, who also impressed in both innings with the ball for the Seconds, and Club Captain Joe Leach.

Gidman said: “Adam has been very close to the first-team squad on a number of occasions. He is improving all the time, and he deserves to be in the squad and knocking on the door.”

The Rapids are lying in third spot with three games remaining and one point ahead of The Bears.

Gidman said: “We are all aware that the lads have given themselves a really good opportunity to progress in the competition.

“But equally there are three other teams who are probably vying for two spots so by no means is it done and dusted.

“We need to work really hard on Friday to start with, to try and get another victory, and keep chipping away at the points that we need.

“Really pleased and proud of the players to get themselves into this position in what has been a very challenging group which has involved some high-quality games of T20 cricket.”