Worcestershire batsman Jack Haynes hit his career-best score but fell just short of his maiden first-class hundred for the second time this month on day one of the LV=Insurance County Championship match with Derbyshire at New Road.

Haynes had struck 87 against Warwickshire at Edgbaston before being unluckily run out and today batted impressively to move within three runs of reaching three figures.

But on 97, the England Under-19 player was caught on the boundary off spinner Matt Critchley to deny him the century his performance richly deserved. 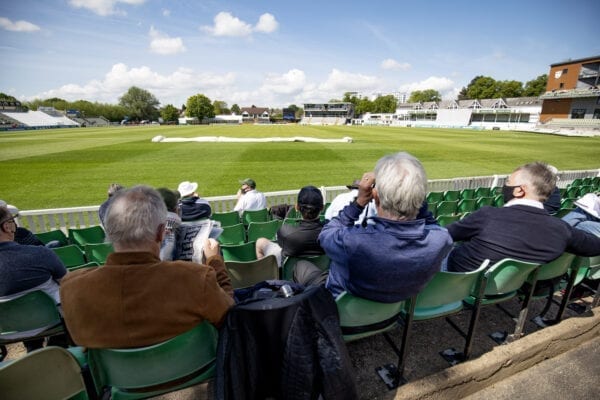 He received a fine ovation from the richly entertained members by his knock on their return to watching cricket at New Road for the first time in 20 months.

Brett D’Oliveira also produced an excellent knock of 71 to follow on from his determined resistance against Nottinghamshire at Trent Bridge, although he, like Haynes, will have been disappointed with the way his innings came to an end.

In the final session, their efforts, plus fine batting by Ben Cox and Ed Barnard, enabled Worcestershire to recover from 62-3 and total an impressive 330-7 by the close on an excellent wicket.

Worcestershire made two changes from the side in action against Nottinghamshire at Trent Bridge. Ross Whiteley made his first senior appearance of the season, and Ed Barnard returned after playing in the opening six matches.

Worcestershire captain Joe Leach won the toss for the sixth time in eight Championship matches this summer and opted to bat first.
Opener Daryl Mitchell (0) was lbw to the first delivery of the game from Sam Conners, which swung back into the right-hander.

Tom Fell and Jake Libby had to contend with a fine opening spell from Conners, and both were dropped at first slip by Leus du Plooy when on 12 and four, respectively.

Fell pulled and cut Dustin Melton for boundaries but failed to profit from his let-off and had not added to his score when he was caught behind off Conners.

New batsman Jack Haynes and Libby scored freely, and a back-foot drive for four by the latter off Conners brought up the 50 in the 11th over.

The pair added 41 on a wicket with more bounce and carry than in the previous matches against Essex and Nottinghamshire at New Road.

But then Haynes drove Milton into the covers, and there was a mix-up with Libby (26), who was run out at the non-striker’s end by Matt Critchley’s direct hit with one stump to aim at with the total 62-3.

Whiteley came in at number five, and he and Haynes batted responsibly in taking Worcestershire through to 98-3 off 29 overs by lunch.

The stand was extended to 53 in 22 overs when Whiteley, having made a patient 22, played a loose looking shot and was caught at second slip by Wayne Madsen off Melton.

Haynes completed his half-century with two through the covers off Melton. It came off 104 balls with six fours.

Brett D’Oliveira, in a new number six role, showed attacking intent against spinner Matt Critchley, cutting and lofting him straight down the ground for boundaries.

Haynes then took full toll of a short ball from Critchley, which he deposited over the mid-wicket boundary for six.

D’Oliveira, in a new number six role, gave him good support in a substantial fifth-wicket stand and offered encouraging words of advice as he approached three figures.

A delicate cut for four by D’Oliveira off Critchley secured a first batting point in the 61st over, and he swept the same bowler for a single to reach a 91-ball half-century.

By tea, Haynes and D’Oliveira had extended their stand to 99, and the 100 partnership came up in the first over after the resumption from Critchley.

But Haynes missed out on three figures when he pulled a shortish delivery from Critchley, and the ball was plucked out of the air by Melton at deep square leg.

D’Oliveira continued fluently and completed his second half-century of the season and went past the 67 he scored against reigning champions Essex at New Road.

But then, shortly before the second new ball was taken, he mistimed a pull off the bowling of Fynn Hudson-Prentice and was caught at mid-off.

Cox (49) and Barnard (48 not out) again highlighted the depth of the Worcestershire batting in adding 88 in another excellent partnership before Cox was caught behind in the final over from Ben Aitchinson.