Head Coach Alex Gidman believes Worcestershire Rapids fast bowler Josh Tongue would have learnt more from bowling two of the final three overs in the thrilling Vitality Blast tie with Notts Outlaws than all the other games in his career put together.

Rapids captain Moeen Ali entrusted Tongue with delivering the 18th and 20th overs despite conceding 23 runs in his opening over during the powerplay.

He responded superbly by conceding just three runs in the 18th over and three more plus a leg bye in the final over in which two run outs also took place as the Rapids secured a valuable point.

It was some excellent “death” bowling from Tongue, who is part of the unchanged 14 strong squad named for Friday evening’s Vitality Blast meeting with Northamptonshire Steelbacks at Wantage Road (7pm start). 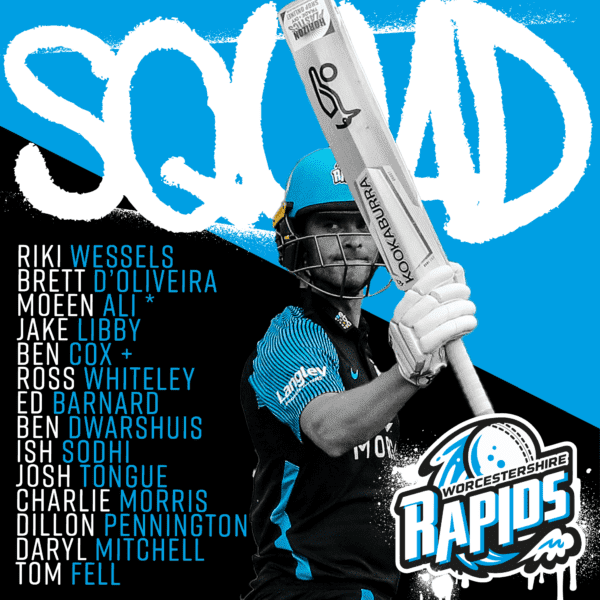 Gidman said: “As a coach, we want to try and win games whilst giving exposure to players in pressure situations.

“For Josh to go through that, albeit a couple of overs of high-pressure cricket, he would have learnt more than any other game he has played – or all the games he has played put together.

“Huge benefits from that scenario, and I thought he handled the situation really, really well.”

The importance of spin in T20 cricket was again highlighted with Moeen, Ish Sodhi and Brett D’Oliveira returning combined figures of 3-52 from 10 overs.

Gidman was delighted with the way Sodhi settled in after not arriving at New Road until Sunday evening and having had little time to practice.

He said: “Spin is still a massive part of the game. As both teams saw on Wednesday, from a batting perspective, facing spin was hard, and it is challenging still in this format of the game.

“It is a significant threat, and it is great to have two world-class spinners in our team and with Brett available as well, who we know is hugely talented.

“It is nice to have the options and those bases covered.

“Ish is a top man, and he and Ben (Dwarshuis) are outstanding blokes and have slotted into the group really well.

“Credit to Ish to slot in so quickly and perform so well. He was outstanding.

“Ish got off a plane on Sunday and, having not been allowed out of his house for a couple of days, only had a bowl for half an hour on Wednesday afternoon before the game.”

The Rapids will look to kick on from their superb fightback against the Outlaws when they take on the Steelbacks in another game televised by Sky Sports.

Gidman said: “I thought the guys were amazing. They fielded exceptionally well, executed with the ball well and deserved the point.

“Credit to Notts in that they were outstanding in the two powerplays, but other than that, I thought we were very good ourselves on the night.”

The Rapids will select from the 11 in action on Wednesday evening, plus Tom Fell, Daryl Mitchell and Dillon Pennington.

Key man: Richard Levi – Without Paul Stirling at the top of the order, extra responsibility will fall on the broad, experienced shoulders of big-hitting Levi to lay strong foundations in the powerplay.

Flies under the radar: Graeme White – Along with his consistent spin bowling, White also contributes valuable runs – evidenced by a 12-ball 37 not out against Birmingham to seal the Steelbacks’ quarter-final place last year.

Best Player Under 24: Saif Zaib – Having nailed down a regular place in Northants’ T20 side last season, the all-rounder will be aiming to build on glimpses of promise with both bat and ball.

Blast expectations: Despite featuring in three finals between 2013 and 2016, Northamptonshire have struggled in the tournament since the last of those, their second Blast success. The Steelbacks peaked early in 2020, winning four of their first five group matches before losing four on the trot and eventually scraping into to the quarter-finals.

But, although Alex Wakely – who captained Northants to both of those Blast victories – has retired, there is still plenty of experience within the squad at Wantage Road. Wayne Parnell, a Blast winner with Worcestershire Rapids in 2018, brings further depth to a capable seam attack led by Ben Sanderson, while off-spinner Mohammad Nabi also looks an astute overseas signing.

The question may be whether the Steelbacks’ batting line-up can deliver the goods regularly enough to secure a place in the knockout stages again.