With something on offer for everyone this summer here at our iconic New Road venue, you really can experience a summer like never before.

From top-class cricket and hospitality, to concerts, our own comedy club, summer conferencing and meeting rooms to being the perfect wedding venue, we really have everything to make your summer one to truly remember.

GIDMAN: EXCEPTIONAL FIELDING A PRODUCT OF PRIDE AND HARD WORK

Head Coach Alex Gidman says the “exceptional” quality of the Worcestershire Rapids fielding in the opening two games of the Vitality Blast is a product of pride in their performance and sheer hard work.

The Rapids have produced near-flawless performances in the field against Notts Outlaws and Northamptonshire Steelbacks with their ground fielding and a series of stunning catches. 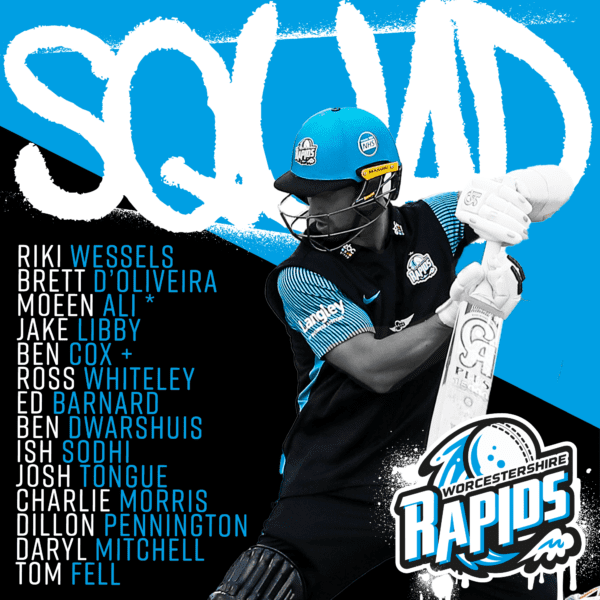 It has been a return to the outstanding displays evident in those departments when the Rapids won the trophy in 2018 and were runners-up in 2019.

Gidman said: “I think we field exceptionally well. They are a very athletic group of players, and they enjoy their fielding.’’

D’Oliveira held onto a fierce cut from Richard Levi at point from the first ball of the Steelbacks innings, and then Whiteley dived full length to cling onto a chance offered by Ricardo Vasconcelos in the third over.

Gidman said: “To get two amazing catches so early in the innings, not only is it taking the wickets, it is setting the tone for the rest of the group to feed off.

“Wickets in the powerplay are crucial, and sometimes it takes that bit of brilliance from the fielders to contribute to that.”

Lancashire have won their opening two matches with the Rapids one point behind in second spot.

Gidman said: “We are fully aware that every team in our group is strong and Lancashire are always a tough opponent.’’

The Worcestershire squad is unchanged and will consist of the 11 players in action against the Steelbacks plus Daryl Mitchell, Dillon Pennington and Tom Fell.

The Former Players XI will take on a team made up of @BDPCL_Official players from Worcestershire Clubs 👇… https://t.co/XEo8XiClP2

𝗜𝗧'𝗦 𝗠𝗔𝗧𝗖𝗛𝗗𝗔𝗬 🏏 After Tuesday's victory away at Gloucestershire, the Rapids travel to Chelmsford to face Essex. 🆚… https://t.co/m3eqinzJNK

☀️ 𝙎𝙐𝙈𝙈𝙀𝙍 𝙍𝘼𝙉𝙂𝙀 We have added some more items to our Summer Range on our online shop! See for yourself 👇… https://t.co/7lHgPr1Xrm

𝙎𝙌𝙐𝘼𝘿 𝙉𝙀𝙒𝙎 Worcestershire Rapids will select from an unchanged squad as they bid to complete a hat-trick of Royal… https://t.co/uMIax6220x

𝗠𝗔𝗧𝗖𝗛 𝗥𝗘𝗣𝗢𝗥𝗧 📝 The Rapids made it two wins from two at the start of the Royal London Cup, as they beat Gloucesters… https://t.co/tL8vdqHbi4

RAPIDS WIN BY 11 RUNS Another superb over from Joe Leach as the Rapids win by 11 runs to make it two from two at t… https://t.co/ZDuJIlpy0W

Gloucestershire need 18 off the final over... #WeAreWorcestershire🍐 #Rapids🌊

Play will resume at 18:12 at the Bristol County Ground. 5.1 overs remaining with the hosts needing 94 to win. Glou… https://t.co/ayXX2ES8eo

RAIN DELAY 🌧 Josh Baker bowls five balls of his first over but the umpires take the players off with Gloucestershi… https://t.co/y25W5sq0AO

Play is set to restart at the Bristol County Ground at 5:35pm with the hosts chasing 115 from 14 overs. #WeAreWorcestershire🍐 #Rapids🌊

UPDATE There will be an inspection in Bristol at 5:15. #WeAreWorcestershire🍐 #Rapids🌊 https://t.co/ggCcURMn9i

2️⃣0️⃣0️⃣ UP FOR THE RAPIDS Josh Baker and Joe Leach run two to help the Rapids to the 200 mark with five overs to… https://t.co/60x6nVe9JU