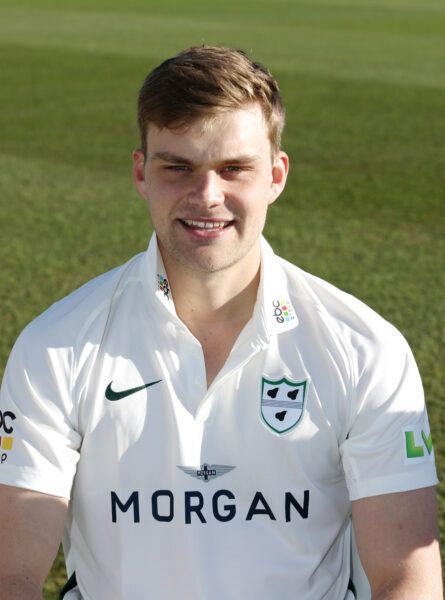 Ben Gibbon has been drafted into the Worcestershire squad for tomorrow’s home LV=Insurance County Championship encounter against Durham, with Head Coach Alex Gidman admitting he has been “knocking on the door since the season started.”

The left-arm pace bowler is in contention to make his senior debut for Worcestershire as part of a 12 strong squad announced today.

He has produced some impressive performances during pre-season and for the Seconds after signing his first professional contract at the end of last season following a successful trial.

Gibbon and fit again all-rounder Joe Leach are added to the players on duty against Nottinghamshire at Trent Bridge, minus the injured Dillon Pennington.

Gidman said: “Ben has worked extremely hard since he joined us. He has got some really good attributes, is a strong left arm bowler, which is really good to have in the balance of a squad and a team.

“He’s adapted well, trained hard in the winter and has been knocking on the door since the season started.

“We are really pleased with how he is coming along.

“He is a bit of an old school cricketer, a no-fuss approach, just runs in, understands his job, and tries to do it to the best of his ability, which is all you can ask for.

“We are really pleased with how far he has come so quickly. We are picking him because he deserves his chance, and we are getting to that stage, already albeit relatively early in the season, where we’ve picked up an injury or two.

“He thoroughly deserves his place in the squad, and we are really looking forward to him going about his business if he gets his opportunity.”

Leach is back after taking ten wickets in the opening two games before missing the trip to Trent Bridge with a stomach bug.

Gidman said: “Joe has had a good start to the season and really disappointed for him he picked up the bug when he did, but these things happen.

“The positive news is he’s had a bit of a rest, which he was likely to need at some stage, and that’s a good thing in the longevity of the season.”

Worcestershire will take on Durham all-rounder Ben Stokes in his first game since being appointed England Test captain in succession to Joe Root.

Gidman said: “From our point of view, it’s wonderful. It’s great opposition, and he is going to be part of a very strong Durham team, probably close to full strength for the first time this season.

“They are still missing Brydon Carse, but Ben Stokes is a pretty decent replacement for him! They are going to be a very strong outfit.

“It is up to us to stand in their way and perform as well as we can do and give a really good account of ourselves.

“There have been so many positives from the first three games of the season in general.”