Worcestershire Women’s Rapids player Sarah Glenn is reflecting on a memorable 12 months since breaking into the England team last December.

The talented leg spinner says her time with the Rapids after moving from Derbyshire has been a big help with her development into a player now ranked in the top 10 of the ICC T20 ratings.

Glenn – whose hero growing up was Australian legend Shane Warne – has just completed a successful spell in the Women’s Big Bash League with Perth Scorchers where she finished as their leading wicket-taker.

It was the latest in a long line of excellent performances by 21-year-old Glenn since her England debut against Pakistan in Kuala Lumpur.

She has not looked back since her initial breakthrough, becoming a key member of the side and is currently ranked in the top 10 of the ICC rankings for the most successful T20I bowlers. 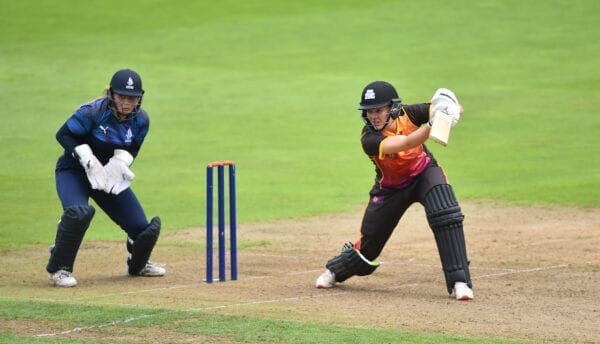 Her England breakthrough came after a memorable 2019 campaign for the Rapids in the ECB County Championship in which she picked up 16 wickets at 19.94 runs apiece.

Glenn said: “It (playing for the Rapids) was definitely a help in my development. I was a bit nervous to start with because I had grown up with Derbyshire Women pretty much the whole time.

“I was coming into a new environment but the girls helped me settle in and I felt I could just be myself which I think helped my performance as well.

“I could play my own game, keep things simple which I think would have helped get me those wickets because I was just backing my plan.

“Knowing that the girls backed me as well helped me.”

She said: “The whole staff at Worcestershire helped me as well. The communication was good in terms of how I explained to them how I want to go about my game and their trusting of that which always helps as well.”

Glenn is also delighted close friend Emily Arlott – another Worcestershire Rapids player – has earned a full-time domestic contract with Central Sparks, and Arlott indicated recently that she wants to emulate Glenn and eventually play for England.

Glenn said: “I’m over the moon for Emily. I read what she said and it was nice and refreshing because I’ve grown up thinking ‘I want to be that person’ or achieve ‘that kind of thing’.

“I think it’s almost nice coming from a close friend as well. It makes it a bit more special.

“She is hard-working and I know how much time and effort she puts into everything so she really deserves it.”

Reflecting on her first 12 months with England, Glenn said: “An amazing 12 months for you? Definitely and I just can’t believe how quickly it has gone as well.

“I’m just really happy with it, considering the challenges of the pandemic and everything, and it is nice to look back at a lot of positives.

“It was unexpected but after the first couple of successful games, it was hard to not take that momentum into the next game.

“I like to take each game as it comes so, even if I played well, I wouldn’t expect to keep playing well. I was really happy and just tried to keep everything simple.”

Glenn picked up six wickets in four games in the ICC T20 World Cup before she and her team-mates suffered heartbreak as the abandoned semi-final in Sydney meant opponents India qualified for the final based on group performances.

She said: “You do so much preparation and I felt really lucky and privileged just to be playing in those games.

“It was really special. Obviously gutted with how it ended but you couldn’t complain performance-wise.” 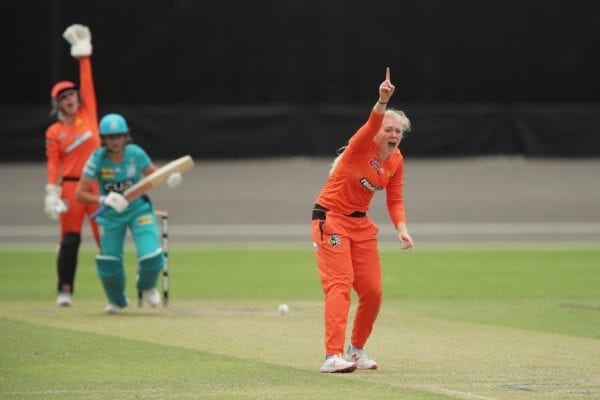 Her performances for the Scorchers have also been top-notch in helping them to reach the Big Bash semi-finals.

She said “It was such a tough tournament to play in but I enjoyed it and feel like I learned so much from it as well.

“The whole experience, in general, was really good for me.”

Glenn is determined to keep improving and expanding her game heading into 2021. 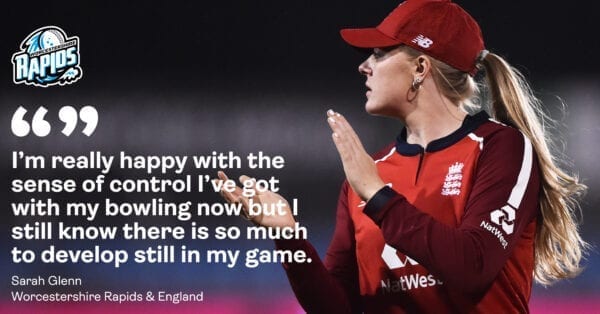 “I’ve still got a few years to hopefully reach peak performances with all my variations and kind of everything coming together.

“But I’m just going to take all the positives I’ve had so far into working towards bowling the variations.”

The skills of Warne made a big impression on Glenn but she is also full of admiration for current England and Worcestershire all-rounder, Moeen Ali.

She said: “Growing up, I looked up to Shane Warne at the time. He was world-class and I was a bit of a geek growing up because I tried to learn how to bowl it (like him).

“I watched all the videos of him and what a fantastic bowler.

“When I got a bit older, in the last few years I’ve looked at Amelia Kerr (New Zealand) who is young as well and how much control she has and her variations as well.

“I’ve also kept in touch with the England games and know Moeen has had a lot of success for Worcestershire as well as England and he just seems like a nice and genuine bloke.

“It’s nice to look up to him with his attitude as well. It’s not just his skills but also his attitude towards things.”