Ed Barnard has spoken of his pride at scoring his maiden first-class century – but knows he has to repeat the feat “over and over again” to help him realise his ambition of moving up the Worcestershire CCC batting order.

A flick off his legs for two against Jamie Porter took Barnard to his hundred batting at number eight as he and fellow centurion Jake Libby put on a magnificent stand of 244 for the seventh wicket.

But Barnard is aware of putting together similar performances consistently to back up his desire to bat higher up.

He told Worcestershire CCC’s official website and social media streams: “We’ve spoken before about it being a monkey on my back, and it’s been something I wanted to do for a long time.

“When I managed to do it, it was a big sigh of relief – and pride at being able to get there.

“I shouted to Jake as soon as I hit it that there were two runs there. I was never not going to come back for two, and it was nice to get that delivery just on your hip when you are on 98.

“It is going to be one of those moments in your career that stand out, and that will be a big one for me.

“Now I’ve got the first one; I want to go and do it over and over again. For me, it’s just about repeating it now.

“It’s nice to get that first one on the board and tick that box, but it’s not the be-all and end-all.

“You are only as good as your last game, so I’ve got to keep doing it now, keep being consistent, and that’s the only way I can show that I’m going to get up that order and I want to be doing it week in and week out.”

Barnard is quick to praise Libby for helping him reach his century. 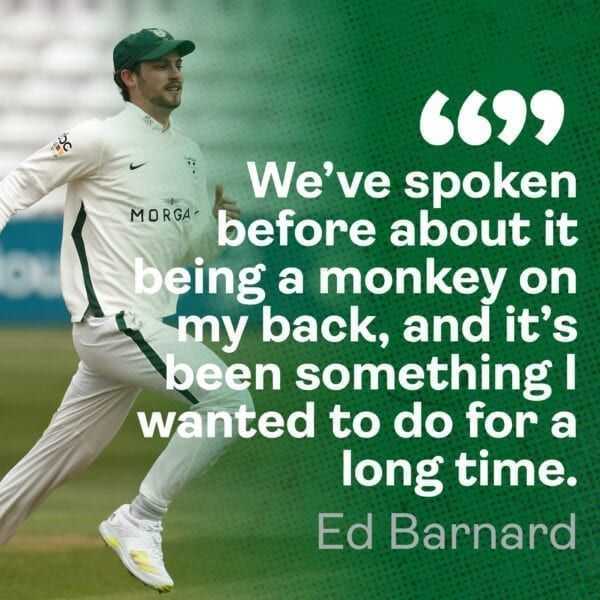 He said: “Jake was brilliant. He’s been outstanding ever since he came in, and he’s such a sort of calm guy.

“He took all the pressure off me, which was really nice. I’ve not batted much with him before, and he has been a superb addition to our squad.

“One milestone I wanted to get past was my career-best (75), and another big one was Alan Richardson’s career-best score because he has always taken the mickey because he had a top score of 91.

“He always used to rib me, saying he was a better batsman, so that was the next one to tick off. Once I got past that, I gave him a bit of a look!

“There were a few nerves, but Jake kept me calm and kept my head level, and I managed to get there quite comfortably in the end.”

Barnard relished having the opportunity to get his head down and bat for as long as possible in helping Worcestershire secure a deserved share of the spoils.

He said: “The good thing about this week was it was pretty obvious what we had to do. We just had to bat as long as we could and take as much time out of the game.

“They had batted so well and got themselves into a position where the win was going to be unlikely for us, but the draw was what we wanted to get from the game after day two.

“That helped me with that mindset that I just had to stay there as long as I could.

“One of the delicate balances of batting in that position (number eight) is knowing what sort of rate you need to score at and when you need to put your foot down a bit more or dig in for as long as you can.”

Barnard was delighted to see Dillon Pennington complete his maiden fifty and that it highlighted the strength in depth of the County’s batting line-up.

He said: “It is incredible to have that strength down the order. Joe (Leach) coming in after me is a high-quality batsman, and all the other lads have shown they are more than capable with the bat.

“That helps, knowing you’ve still got batting behind you, and you are still going to get chances to bat for a while.

“Everyone knows Dillon can bat, and has the quality to do it, so for him to spend some time in the middle and show everyone else is excellent for him.

“The squad we are building is starting to show signs of quality throughout, and that is just another tick in the box, being able to bat for as long as we can and as deep as we can.”

The ability to bat for nearly two days at Chelmsford followed on from two days of highly disciplined bowling and making Essex fight for every run.

Barnard said: “It’s been one of the things we’ve spoken about as a team is wanting to play the long form of cricket and take games as deep as possible because that’s what all the better sides in the country do.

“The fact we were able to do that on not the most conducive of pitches for bowling, and to keep that run rate to what we did, set up the rest of the game for us.”