COUNTY “FULL OF BELIEF” HEADING INTO SECOND HALF OF GROUP PROGRAMME

Worcestershire CCC will have all to play for and are “full of belief” as they launch the second half of their LV=Insurance County Championship Group One programme against Durham at the Emirates Riverside tomorrow.

Worcestershire are lying in third spot after drawing their opening five games and just seven points off current leaders Nottinghamshire, whom they travel to meet at Trent Bridge next week.

A 14 strong squad has been named for the second of three successive away games after Worcestershire collected 14 points from the drawn encounter with Warwickshire at Edgbaston.

Head Coach Alex Gidman said: “It’s an extremely tough group. When teams are fully fit, and have international players back, there are some really strong teams.

“Durham, with Mark Wood back, at the moment, look like a very strong outfit, so it is another challenging week ahead for us.

“But we are confident. The lads are playing some good cricket, we know we can keep improving, but they are excited about the next fixture.

“With the conditions we’ve had and the opposition we’ve had, it’s been a question of ‘how many points, not how.’

“I’m not looking at the win-loss columns; it’s about how many points we have.

“It’s about accumulating as many as you can over a season and, the cards that have been dealt with us so far have meant trying to do that through good draws and as many bonus points as possible.

“We are in a good place going into the second half of the programme.”

West Indies paceman Alzarri Joseph is rested for the Durham game as part of the rotation policy with the pace bowlers employed throughout the group matches.

Gidman was pleased with the overall performance after a challenging opening session in the drawn game with The Bears.

He said: “The lads reacted well to that first session, really improved and had six or seven good sessions of cricket after that.

“We went toe to toe with Warwickshire, and I thought we batted well again against an excellent attack.”

Jack Haynes will be looking to continue the fine form shown during his first appearance of the season at Edgbaston when he was unluckily run out 13 runs short of a maiden first-class hundred.

Gidman said: “Jack has had to wait to get into the team but showed that real hunger we need from all of our players.

“He looked good at the crease, and it was a disappointing way for him to get out when so close to your first hundred.

“But he has proved to us all how good he is, and I’m looking forward to seeing him carry on that form.”

Barnard also maintained the fine form he has been showing with the bat this summer by making an unbeaten 76.

Gidman said: “Ed put in a massive shift in last winter but didn’t get the opportunity to show his improvements last year in the shortened season.

“He is working extremely hard with his batting behind the scenes and when you work hard, it generally pays off, and he is showing that at number eight.

“He is scoring some great runs for us and crucial runs as well.” 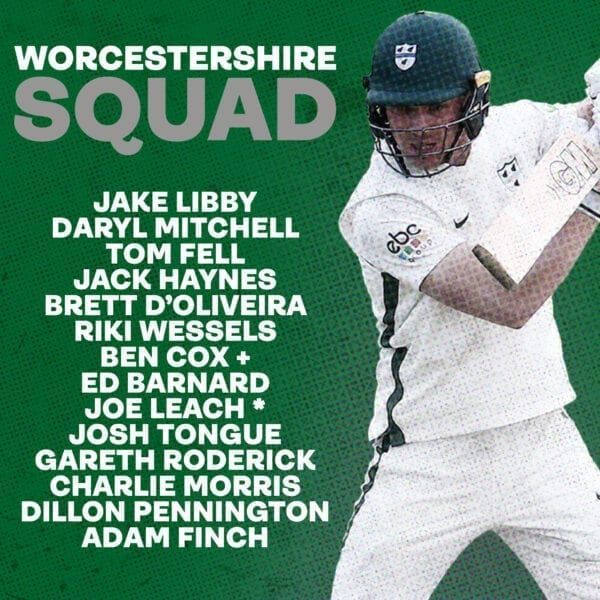