COTHAM BROUGHT INTO RAPIDS SIDE FOR EDGBASTON DERBY

Worcestershire Women’s Rapids have brought seamer Jenny Cotham into their side for the ECB T20 doubleheader with local rivals Warwickshire at the Edgbaston Community Sports Ground on Sunday.

Cotham replaces the unavailable Emily Arlott in the one change from the side selected for the weather hit encounters with Staffordshire at Bromsgrove CC last weekend.

Rapids captain Chloe Hill said that Hannah Hardwick would be handed an opportunity with the new ball alongside Ellie Anderson.

The duo are both members of the inaugural Central Sparks Academy intake.

Hill said: “We felt confident going into last weekend and were on top against Staffordshire in the one game that did start.

“Emily Arlott’s first over was nipping over the top of off-stump, which was lovely to see!

“We had decided to bowl first on a wet day, and it was all in our favour, and then the rain came, unfortunately.

“For Warwickshire, we’ve got one change. Emily (Arlott) is unavailable, so we bring in Jenny Cotham, another seamer.

“Hopefully, the youngsters can step up in Hannah Hardwick and Ellie Anderson with the new ball, with a bit of raw pace from Hannah.

“It gives them a chance to show what they can do, and hopefully, they will embrace the challenge.”

The Rapids made a flying start to their campaign with a double success over Berkshire at Falkland CC, Newbury.

But the weather hit Bank Holiday Monday meant the two games against Staffordshire secured them only one point apiece.

Somerset are the current group leaders with the Rapids, and Warwickshire tied on 10 points apiece.

The Bears began their campaign with two wins over Wales but their scheduled doubleheader with Berkshire was a wash-out. 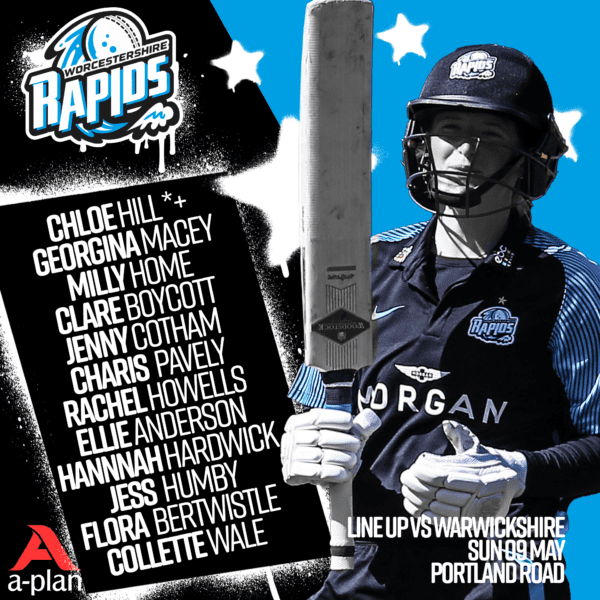