Worcestershire CCC Club Captain Joe Leach has praised “a fantastic effort by everyone” after the Rapids Relay raised more than £13,500 for the Acorns Children’s Hospice.

The County’s players – Senior Squad, Women’s Rapids and Academy – coaches, support staff and officials all contributed to the week-long event of 12 one-hour running sessions per day which totalled 1,008 kilometres.

The ‘virtual’ route mirrored the number of kilometres involved travelling to venues in the Rapids Vitality Blast North Group via Worcestershire-Warwickshire-Lancashire-Durham-Yorkshire-Nottinghamshire-Derbyshire-Leicestershire-Northamptonshire-Worcestershire.

This was completed in splendid fashion with a day to spare during the final hour long run of Wednesday and the £12,000 target was surpassed yesterday (Thursday).

Leach, who himself ran the first leg on Friday, said: “This was a great idea initiated by Alex Gidman (Head Coach) and everyone at the club really bought into it – players from all levels, coaches and support staff to the chairman, who also ran one of the stages.

“Most importantly it helped contribute towards such a worthy cause in the Acorns Children’s Hospice which is already a special charity to everyone at the club.

“These are difficult times for organisations which rely on support from people to help keep them going and our members and supporters have played a magnificent part in raising so much.

“Thank you so much to them for their donations and it has been a fantastic effort by everyone, it was great to see children, parents and supporters joining us in their own Rapids Relay!

“It produced even more of a togetherness between the whole Worcestershire CCC family of the squad, coaches, academy lads, women’s players, club officials and staff.

“It also gave a real extra incentive, buzz and competitive edge to those training runs we are currently doing at this challenging time when you would normally be playing cricket.”

The donations of Worcestershire CCC members and supporters meant the figure raised by 8pm on Thursday was £12,951 and by Friday morning had increased to over £13,500.

Following on from the massive success of the Rapids Relay, we are now offering supporters and members the chance to purchase a commemorative t-shirt, with all of the profits going to Acorns Children’s Hospice.

The Rapids specially designed blue t-shirts are available priced at just £15 for Adults and £10 for Junior sizes on a pre-order basis. This includes postage and packaging. 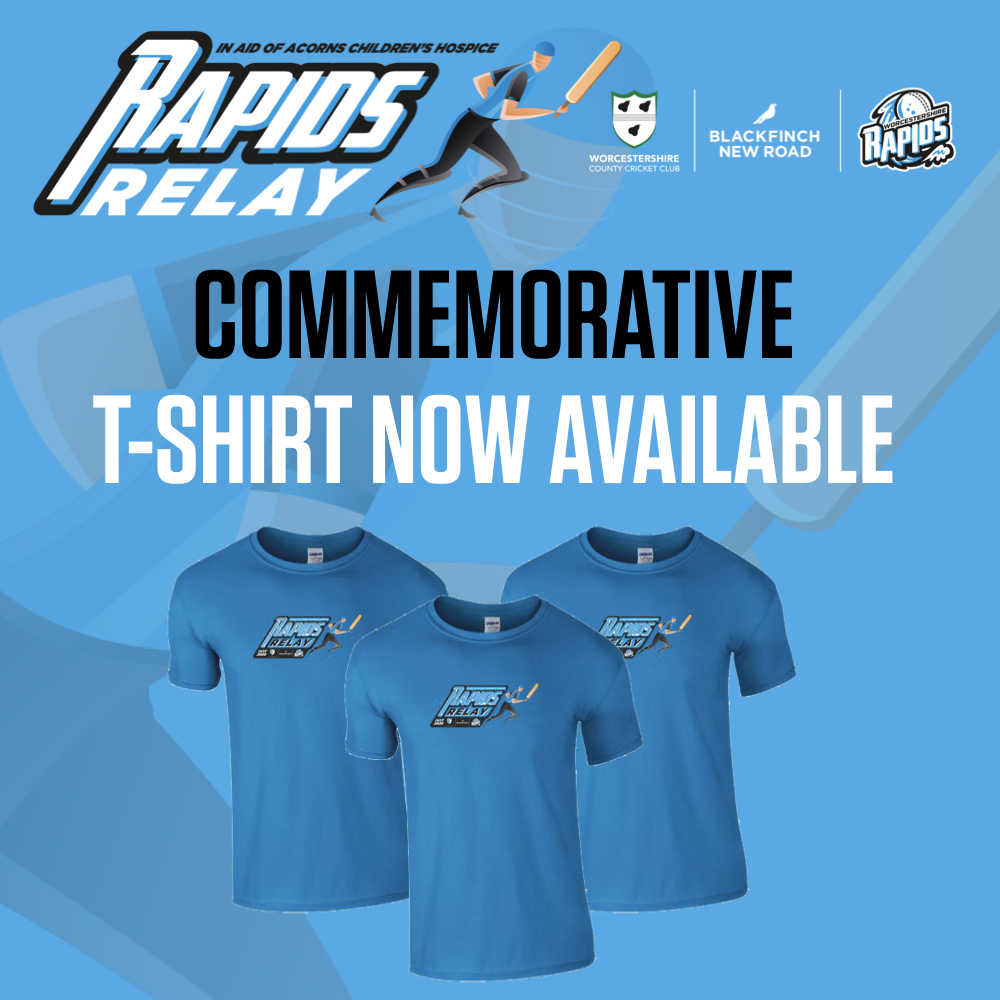 𝘽𝘼𝙍𝙉𝘼𝙍𝘿 𝙂𝙀𝘼𝙍𝙄𝙉𝙂 𝙐𝙋 💪 Ed Barnard enjoyed a prosperous year with the bat in 2021, and he's back in training looking… https://t.co/H4TqyTFAiO

Access to the Executive Lounge in The View 🎟 Panoramic views of the cricket 👀 Complimentary Tea & Coffee on match d… https://t.co/zn44sz8rAc

Alan Richardson has been named England's bowling coach for the upcoming IT20 series against the West Indies in the… https://t.co/AINj3hlbO3

3️⃣ 𝗖𝗼𝗺𝗽𝗲𝘁𝗶𝘁𝗶𝗼𝗻𝘀 1️⃣ 𝗠𝗲𝗺𝗯𝗲𝗿𝘀𝗵𝗶𝗽 Get guaranteed entry to all Worcestershire home games in 2022, including the seve… https://t.co/DL404b4ZpL

𝗪𝗜𝗡𝗧𝗘𝗥 𝗖𝗢𝗔𝗧 𝗖𝗛𝗘𝗖𝗞 ✅ We know it's starting to get even colder, so don't stress! We've got you covered with our bra… https://t.co/SJW6CS5YRb