Boycott, who used to train in the same nets as a youngster as Worcestershire CCC paceman Josh Tongue, has clocked up more than 130 appearances in the County’s colours during the past 13 years.

She was initially surprised at her call-up by the Central Sparks for their inaugural campaign last summer – but the right-arm pace bowler showed her quality and ended as their leading wicket-taker with eight victims at 20 runs apiece. 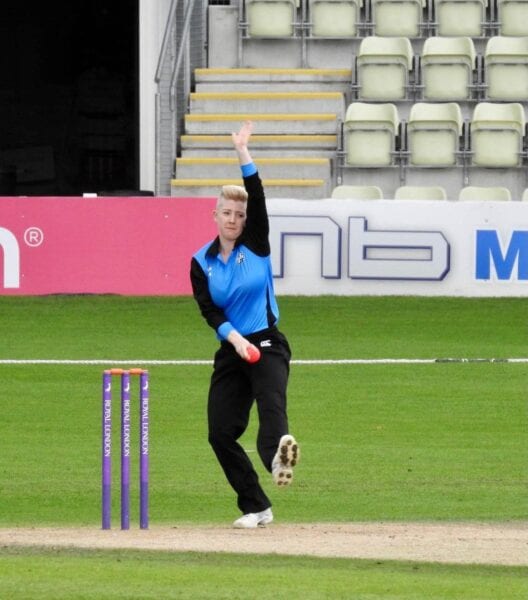 It included an excellent return of 4-40 against the Thunder at New Road as the Sparks, who also included fellow Worcestershire Rapids duo Emily Arlott and Chloe Hill in their squad, finished runners-up to Northern Diamonds in the North Group.

Boycott relished the pressure of a step up in standard and facing England stars such as Katherine Brunt, Jenny Gunn and Natalie Sciver.

The eventual 2020 champions, Southern Vipers, are included in the Sparks group this summer. But 27-year-old Boycott believes the Sparks have the quality to give another good account of themselves.

She said: “From starting up as a new team, I think we gelled pretty quickly, and everyone got to know each other well.

“Worcestershire and Warwickshire were rivals previously, but there were no hard feelings, everyone got along with each other, and we played pretty well.

“We wanted to finish top of the group and qualify for the final, but, all in all, finishing second was pretty good.

“The standard can only enhance players as individuals, and getting to face people like Katherine Brunt, Jenny Gunn, and Natalie Sciver was a great experience.

“It was great fun and good to test myself at that level.”

Boycott admitted: “There was more pressure on you when you were bowling, and if you bowl that bad ball, it is probably going to get whacked for six!

“But I quite like the pressure, bowling at those players who are notoriously pretty good. That brings out the best in me.”

Boycott’s excellent form came after she admitted: “I didn’t even think I’d get selected in the squad, and when I got the call, it was a case of ‘wow’.
“I didn’t think I’d play because there were a lot of good players and up and coming girls. I thought maybe I’d be on the side-lines and to play and take eight wickets was awesome.

“I loved it so much and just hearing some nice comments and people ‘bigging’ you up is nice to hear.

“It gives you a lot of confidence going into this season, and hopefully, I will be able to replicate it this year as well.”

As regards the Sparks chances of success in 2021, Boycott said: “We’ve been training hard over the winter, some tough sessions, and been put through our paces, and I don’t think it is impossible for us to get to the final.

“We’ve got 50 over and T20 competitions this year. It looks like we’ve got a pretty tough 50 over group. We’ve got the Vipers, and they won it last year.

“That will be our biggest test, playing against the Vipers, because they are pretty good as well. Confidence is pretty high, and I don’t see why we can’t go and push for that final spot.”

Boycott, who will be supporting International Women’s Day on March 8, feels the Worcestershire Rapids contingent can be proud of their efforts last summer.

She said: “The Worcestershire players had a pretty good season. Chloe (Hill) got some runs, Emily (Arlott) took some wickets and got runs – and some spectacular catches.

“We had a great time and thoroughly enjoyed the experience in the Rachael Heyhoe Flint Trophy.”

Boycott’s link with Josh Tongue, who was also born in Redditch, goes back many years.

She said: “Myself and Josh used to train together back in the day at Evesham Prince Henry School’s nets on a Friday evening, him and his brother Ryan.

“Now seeing Josh being successful playing for Worcestershire over the past few seasons is great.”
end