Worcestershire Rapids have it in their own hands to secure a Vitality Blast quarter-final spot – and Head Coach, Alex Gidman, is braced for “two tough away games of cricket” against Birmingham Bears and Leicestershire Foxes in the climax to the North Group.

The Rapids are currently in third spot, and victory against Birmingham at Edgbaston tomorrow would clinch a place in the knockout stages for the third time in four years.

They wind up their Group programme away to Leicestershire Foxes on Sunday. 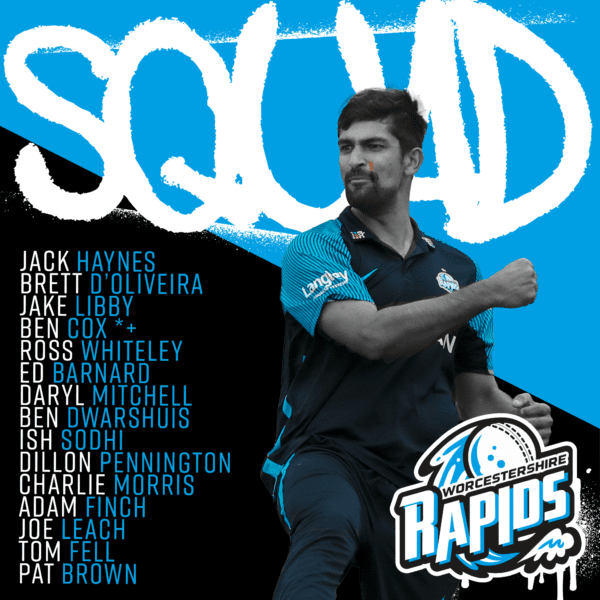 Paceman Pat Brown, their leading wicket-taker in the 2018 and 2019 Blast, is back fit and named in a 15 strong squad.

Gidman said: “It’s been a competitive and demanding campaign. To be in this position, with a couple of games to go, to have things in our own hands, so to speak, is a great effort.

“But clearly, we have got two very tough games of cricket. Birmingham will be back to full strength by the looks of it, and Leicestershire are also extremely competitive.

Ben Dwarshuis, Ross Whiteley, Dillon Pennington and Charlie Morris return after a week’s break from action since the home win against the Bears last Friday.

Gidman said: “We wanted to win the County Championship game against Warwickshire and put out a team we believed could win that game.

“It was a competitive four days which resulted in a draw.

“On the flip side, we’ve had to bear this weekend in mind and try and get the balance right between the two games.

“There are some fresh legs to come in tomorrow, and we are looking forward to the impact those guys can have on the group.”

Gidman confirmed the return of Brown after a back problem, and he picked up two wickets for the Under-18s this week in a T20 match against Warwickshire Under-18s. He said: “Pat is available for selection again”.

Spinner Danny Briggs is back from England duty for Birmingham, while West Indies pair Carlos Brathwaite and Kyle Mayers are also available.
—