BRETT SEIZES OPPORTUNITY TO OPEN INNINGS FOR RAPIDS IN BLAST

Brett D’Oliveira has seized the opportunity to open for Worcestershire Rapids and is their leading run-scorer heading into the final stretch of Vitality Blast North Group matches.

D’Oliveira has scored 247 runs with three half-centuries against Lancashire Lightning (61 not out), Durham (67) and Leicestershire Foxes (69) – the latter a career-best.

Rapids captain Ben Cox has been full of praise for the efforts of D’Oliveira, who played his 100th T20 match for the Rapids against the Foxes.

He was given a chance to open after scoring a century off 50 balls in a warm-up T20 game for Worcestershire Seconds against Gloucestershire
Seconds at Kidderminster in which both counties fielded full-strength sides.

Cox said: “Brett has been outstanding. He has never batted before at the top of the order in T20 cricket.

“He took his opportunity when scoring 100 off 50 balls in a second-team T20 against a virtually full-strength Gloucestershire side.

“He has taken it into the first team, and he looks in control, looks assured, looks calm, and it is sometimes what you need.

“You don’t always need a 30 off 15 balls if you can play like that and keep the scoreboard ticking over and take it deep.

“We’ve got the power and the know-how to get us over the line further down the order.

“Brett hits awkward gaps. He can squirt it around the corner, can hit it straight, can dink if he needs to. He is quite hard to bowl to, and he plays spin exceptionally well.”

D’Oliveira’s opening partner, Riki Wessels, has also been amongst the runs and is the Rapids second-highest scorer with 221 at a strike rate of 133.93.

Charlie Morris (11) is the leading wicket-taker on the bowling front, including a career-best 3-37 versus Durham at New Road. 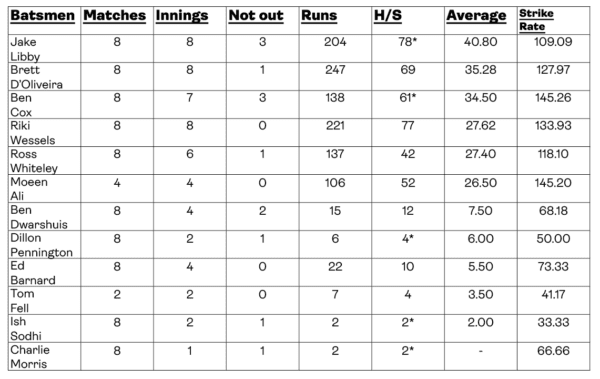