Brett D’Oliveira spoke of his relief at launching his reign as Worcestershire CCC’s official Club Captain with a century after producing an innings in contrast to his usual free-flowing knocks, but one that is just as crucial.

D’Oliveira dug in to shore up one end for lengthy spells on day two of the LV=Insurance County Championship match with Leicestershire at the Uptonsteel County Ground after coming to the wicket at 32-3 yesterday evening. 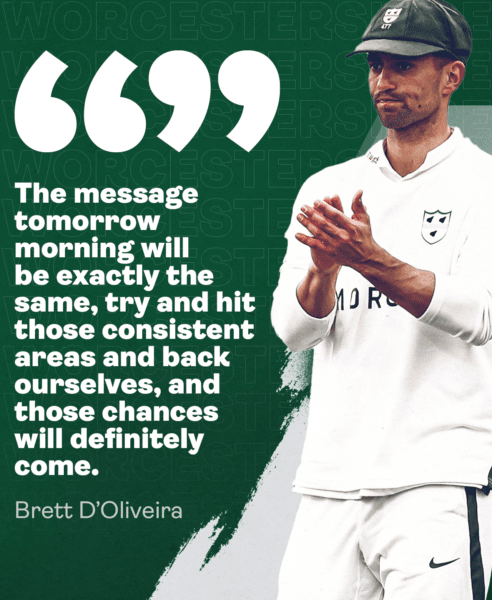 It allowed Ed Barnard (57) and Joe Leach (70) to score freely at the other end and was an invaluable effort that gradually blossomed and saw D’Oliveira complete a 202 ball century.

Worcestershire eventually totalled 348 on a wicket, still offering some help to the bowlers, and then Leach (2) and Charlie Morris (1) reduced Leicestershire to 42-3 by the close.

D’Oliveira said: “Does it get much better? Yes, it does actually if we go on to win the game. That’s the main thing, but I’m obviously delighted with getting a century in my first game as captain.

“What was the feeling? Just relief more than anything. It’s the start of the year, the beginning of a big year for myself, and it was just nice to get over that line, and hopefully, we can go on to win the game now.

“I prefer the free-flowing knocks. It was more a mental battle than anything, trying to dig it out and stick in there, but there is more satisfaction now.

“It was about occupying the crease for as long as we could and just try and hit the bad ball.”

D’Oliveira was quick to praise the contributions of Barnard and Leach in transforming Worcestershire’s fortunes.

He said: “Ed’s knock was tremendous, and it just took the sting out of the game and started to shift the momentum when he started to play his shots.

“We know how good Ed is and how good he was last year.

“We know what Joe’s capabilities are. He is a tremendous ball striker, and he has got first-class centuries, and I just back his ability all the way.

“I wasn’t trying to change much, other than occupy the crease, and Joe coming in and playing the way he does just takes that bit of pressure off me.

“He makes good bowlers bowl bad balls because of how he plays.”

D’Oliveira added: “Do I feel more pressure as captain? There are probably elements of that at times. There is perhaps a weight lifted off Joe’s shoulders, and you can see that the way he is with his body language and how he carries himself now.

“Happy with 348? Absolutely. You always want more, but especially in the position we were in, getting 348 on that wicket with the balls in it was a good achievement.

“The message tomorrow morning will be exactly the same, try and hit those consistent areas and back ourselves, and those chances will definitely come.”